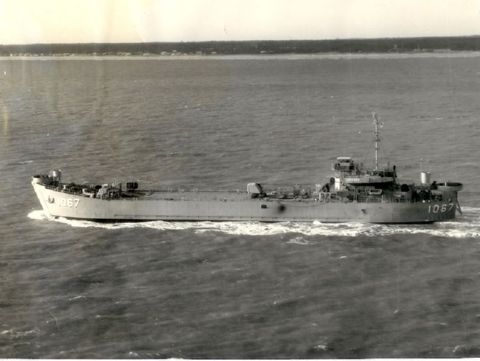 Upon completing shakedown along the Virginia coast LST-1067 sailed to Davisville R.I. to load materials of war. Departing 16 May 1945 she steamed via the Panama Canal first to Pearl Harbor and then with additional cargo to Guam arriving 19 July. A second logistic voyage from the Hawaiian Islands to the Marianas occurred in the immediate aftermath of the Japanese surrender. She then embarked occupation forces at Leyte and landed them on Honshu Japan 2 November.

Turning eastward for the long trip to the States LST-1067 arrived San Francisco 6 January 1946 and decommissioned at Portland Oreg. 13 August 1946.

Named Nye County 1 July 1955 the landing ship recommissioned "in reserve" 22 May 1963 and was assigned to the newly created RESLSTRON 2 based at Little Creek Va. The value of this squadron during the Dominican Republic crisis brought a full commissioning 21 December 1965 and new duties in the Western Pacific.

Though based at Sasebo Japan Nye County spent much time between April 1966-March 1967 offloading supplies at critical points along the central coast of South Vietnam. Ordered to Pusan Korea she decoinmissioned 27 March 1967 and was turned over to the Military Sea Transportation Service. Manned largely by a Korean crew she continues to sail in Far Eastern waters in 1970.