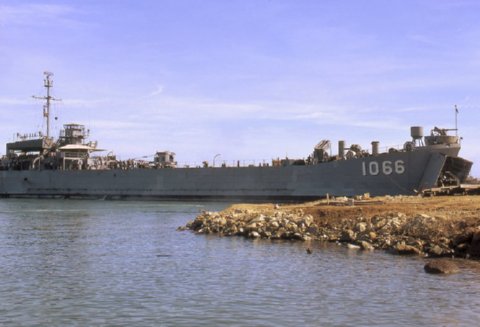 Following shakedown the newly designated flagship of LST Group 99 departed New York 11 May 1945 in convoy for the Western Pacific. Three months later having transited the Panama Canal LST-1066 reached Leyte Philippines via the Marshall and Caroline Islands. After transferring ammunition to fleet ships she sailed 18 October from Lingayen Gulf Luzon on the first of two voyages transporting elements of the 6th Army to the Japanese home islands of Honshu and Shikoku for occupation duty.

On 30 November she joined the procession of ships old and new steaming homeward and arrived San Pedro Calif. 13 January 1946. In March 1946 placed out of commission in the reserve LST-1066 joined the Pacific Reserve Fleet in Puget Sound.

Though given a name New London County (LST-1066) on 1 July 1955 the ship remained inactive until the aftermath of the Cuban missile crisis of 1962. The Navy placed several LSTs in commission in reserve and created ResLSTRon TWO at Little Creek Va. New London County joined this squadron 19 June 1963. Beaching and other training exercises commenced in the fall of 1963 and found real application during the Dominican Republic crisis in the spring of 1965. The escalating war in Vietnam a country with limited port facilities caused LST-1066 and her sister ships to be placed in full commission 21 December 1965. After a brief yard period and some intensive refresher training at Pearl Harbor the squadron reached the Western Pacific in April 1966.

Home ported at Sasebo Japan this landing ship spent much of her time unloading supplies especially cement along the central coast of South Vietnam. In February 1967 new orders directed the ship to Pusan Korea. There she decommissioned on the 27th and was turned over to the Military Sea Transportation Service in whose service she continued to sail during 1969. On 13 January 1970 while back off the Viet Namese coast she was damaged by an underwater explosion. She was subsequently towed to Da Nang for repairs.