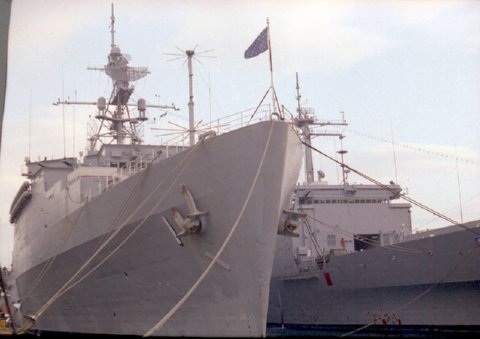 The USS RALEIGH (LPD-1), a Raleigh class amphibious transport dock, was commissioned on 8 SEP 1962. USS RALEIGH served her country for 29 years, 3 months and 5 days, until decommissioned on 13 DEC 1991. After fit out, USS RALEIGH sailed to Guantanamo Bay for shake down training. A return to the ship yard for a piping retro-fit interrupted the Guantanamo Bay training, however she return to Guantanamo Bay and completed REFTRA in April 1963. As the first of a new class of "Landing Platform Dock Ships", she had the designed capability to support helicopter borne troop and cargo deployment. In July 1963, RALEIGH, home ported in Norfolk, began her assigned duties, deploying to the North Atlantic, Caribbean, Mediterranean, and on in to the Indian Ocean, as needed. Her service career ended with her decommissioning in December 1991. USS RALEIGH was sunk in a Fleet exercise in December 1994.

Final Disposition: Disposed of as a target 4 December 1994

After fitting out through mid-December Raleigh steamed to to Norfolk VA. for the holiday season. Im January 1963 she steamed for shakedown to Guantanamo Bay Cuba but returned to the building yard in late February for correction of design defeficiencies in her aviation gasoline system. Returning to Guantanamo in April she completed shakedown then assisted Commander Amphibious Force Atlantic in hosting the Navy League national convention in San Juan P.R.

Returning to Norfolk 1 June Raleigh completed a week's amphibious training at Little Creek and then deployed to the Caribbean in July with Amphibious Squadron 8. Raleigh proved herself during this dedlovment by simultaneously landing troops and equipment by means of boats and amphibious vehicles from her well and by helicopters from her flight deck. During th is cruise she made one trip to Haiti as tension there rose.

Raleigh returned to Norfolk 1 October and then underwent post-shakedown availability at New York 7 January 1964 through 13 March. During the spring she conducted amphibious training operations off Onslow Beach N.C. Steaming for Europe 12 October Raleigh arrived off the coast of Spain and took part in Operation "Steel Pike." She then called at Oporto, Portugal, and Vigo, Spain before returning to Norfolk 27, November. After a yard period at the U.S. Naval Shipyard Portsmouth Va. she deployed to the Caribbean 1 April 1965 with the Amphibious Ready Squadron. From 25 April through 6 June she operated off the Dominican Republic evacuating 558 refugees who were later transferred to Yancey (LKA-93) for transit to San Juan. For her part in the endeavor Raleigh and her crew received the Armed Forces Expeditionary Medal. She returned to Norfolk 29 June.

After upkeep and coastal training operations Raleigh steamed for northern Europe 27 August to participate in "Bar Frost 65 " a NATO amphibious exercise featuring a landing in Norway's fjords north of the Arctic Circle. Returning to Norfolk 23 October she underwent a yard period through 4 April 1966 and then steamed for refresher training at Guantanamo Bay.

Raleigh's deployments to the Caribbean from Norfolk as a unit of the Amphibious Ready Squadron averaged two per year up until 1970. In July of that year she began the first of a series of Mediterranean cruises and has averaged one a year into 1974.


Add Your Name to the
LPD-1 Crew Roster