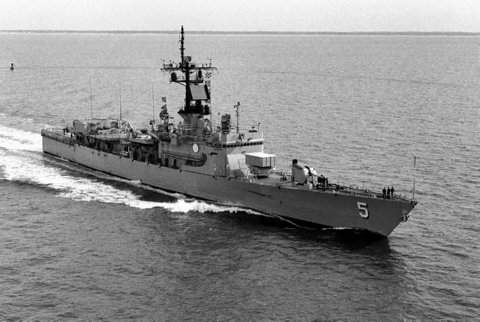 Final Disposition:Disposed of by Navy title transfer to the Maritime Administration March 28 1994

In mid-October 1967 Richard L. Page moved from Boston to her homeport Newport R.I. then sailed south for shake-down exercises in the Caribbean. On 21 December she returned to Newport and after post-shakedown availability began operations with CortRon 6. Into 1968 she operated in the western Atlantic and in the fall she deployed to the Mediterranean for duty with the 6th Fleet. On that duty until 10 February 1969 she returned to Newport on the 18th and in March resumed operations with the 2d Fleet. On 1 July 1969 she relieved Brumby (DE-1044) as flagship of DesDiv 122 then conducted exercises in the Caribbean.

L. Page spent all of 1971 and the first eight months of 1972 in port at Newport and in operations along the east-coast of the United States and in the Caribbean. In mid-August 1972 she steamed out of Newport R.I. bound for an extended deployment with the Sixth Fleet in the Mediterranean. As of January 1974 she continues operations in the Mediterranean.


Add Your Name to the
FFG-5 Crew Roster