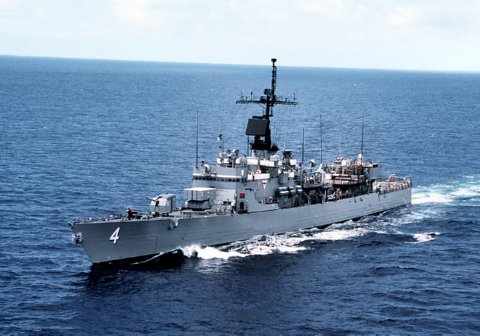 The third Talbot (DEG-4) was laid down on 4 May 1964 at Bath Maine by the Bath Iron Works Corp. Launched on 6 January 1966 sponsored by Miss Frances K. Talbot and commissioned on 22 April 1967 Comdr. Edwin E. Woods Jr. in command.

On 8 July the new guided-missile escort ship departed Hampton Roads Va. for Puerto Rico for shakedown and missile system trials. Talbot next headed north and arrived at her home port Newport R.I. on 16 September. The ship conducted special op erations off the Virginia Capes from 16 October to 18 November and then spent most of her time until the spring of 1968 undergoing post-shakedown availability. Following firing exercises at the Atlantic Fleet weapons range and antisubmarine operations lat e in April the destroyer escort participated in the search for missing nuclear submarine Scorpion (SSN-589) in May. She devoted the rest of the year to operations along the Atlantic coast and in the Caribbean.

On 31 January 1969 Talbot departed Newport for the Mediterranean and was deployed with the 6th Fleet until she returned on 11 July. After overhaul at the Boston Naval Shipyard was completed on 1 April 1970 Talbot conducted local operations before returning to the missile range off Puerto Rico in May for weapons tests followed by refresher training and four months at Newport. On 28 October 1970 she headed for the Mediterranean and her second tour with the 6th Fleet. The deployment ended at Newport on 2 May 1971 and she devoted the remainder of the year to east coast operations.

Talbot spent the first part of 1972 conducting tests of the MK-48 torpedo in the Bahamas and off the New England coast. She stood out of Newport on 21 July and proceeded to Roosevelt Roads Puerto Rico accompanied by Farragut (DLG-6) and Forrest Sherman (DD-931). There Remora (SS-487) joined the group on the 26th and they began combined operations with chips from seven South American navies while circumnavigating South America. Talbot made calls in Venezuela, Brazil, Uruguay, Argentina, Chile, Peru, the Canai Zone, and Colombia before returning to Newport on 3 December 1972 She entered the Boston Naval Shipyard on 15 February 1973 for an overhaul that lasted until 14 December.

On 5 January 1974 Talbot departed Newport and proceeded to her new home port Norfolk Va. From 13 February to 29 April the ship was deployed on training exercises off Jacksonville Fla. Guantanamo Bay, Cuba; and Vieques, Puerto Rico. After a cruise to Newport in May she entered the Norfolk Naval Shipyard on 17 June for the installation of prototypes of the Oto Melara Mk 75 rapid-fire 76mm gun mount and the Mk 92 fire-control system intended for use in the new FFG-7 and PHM-1 classes. She stood out of Hampton Roads on 21 October and from 12 November through 19 December 1974 tested the new systems at the Atlantic Fleet Weapons Range Culebra Puerto Rico.

Talbot continued her evaluation work into 1975 alternating three periods of test operations at Culebra with a tender availability alongside Puget Sound (AD-38) at Norfolk local operations in the Virginia capes area and fleet tactic al exercises in the western Atlantic. Her test mission completed Talbot returned to Norfolk on 22 June. After local operations and inspections she entered the Norfolk Naval Shipyard on 15 September for a three-month overhaul in which her experime ntal fire-control system and 76mm gun were removed and replaced by her normal 5-inch 38-caliber gun and fire-control system.

Upon completing overhaul and refresher training in the spring of 1976 Talbot departed Norfolk on 22 June for a Mediterranean deployment. The six-month operation included participation in NATO exercises interspersed with port visits and concluded w ith the ship's return to Norfolk on 10 January 1977. Following postdeployment leave and upkeep Talbot conducted exercises off the east coast until she entered the Philadelphia Naval Shipyard for overhaul on 9 June. Completing overhaul on 7 April 1 Talbot spent the balance of the year in refresher training and participating in Fleet exercises off the east coast and in the Caribbean. On 6 December she departed the United States for deployment with the Middle East Force in response to the crisis surrounding the deposition of the Shah of Iran. The close of 1978 found Talbot en route to the Persian Gulf.


Add Your Name to the
FFG-4 Crew Roster