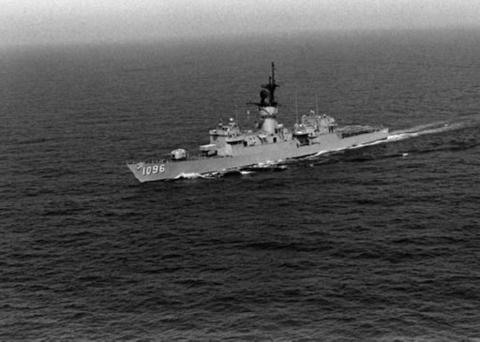 Valdez spent the following three months in Charleston fitting out and completing final trials. She departed Charleston on 27 October, bound for Guantanamo Bay, Cuba, whence she operated for the next seven weeks. Upon completion of her shakedown cruise, she returned to Charleston for a month of leave and upkeep followed by inspections and preparations for post-shakedown availability. That availability began on 25 February 1975 and ended on 11 April. At that juncture, she began normal operations out of Charleston and, later, participated in Exercise "Solid Shield," an amphibious landing and convoy protection exercise conducted during the last week in May and the first week in June near Morehead City, N.C. On 6 June, the ocean escort returned to Charleston and resumed the normal routine until 18 August. During that period, she was reclassified a frigate and redesignated FF-1096 on 30 June 1975.

On 18 August, the frigate steamed out of Charleston for her first overseas deployment. She changed operational control to the 6th Fleet upon arrival at Rota, Spain, on the 29th. From there, the frigate moved into and across the Mediterranean Sea to Egypt. She transited the Suez Canal on 5 September and the next day reported for duty with the Middle East Force at Djibouti in the French Territory of the Afars and Issas. During her tour of duty with the Middle East Force, Valdez participated in bilateral exercises with units of the naval forces of France, Iran, Abu Dhabi, and Pakistan as well as of the Air Force of Kuwait. She also embarked officers of the Saudi Arabian Navy for training and participated in the multinational CENTO exercise codenamed MidLink-75. Ports of call included Bandar Abbas, Iran; Bahrain; Kuwait; Shar-jah and Abu Dhabi in the United Arab Emirates; Karachi, Pakistan; Assab, Ethiopia; Victoria in the Seychelles; and Jidda, Saudi Arabia.

On 31 January 1976, Valdez retransited the Suez Canal on her way home. She recrossed the Mediterranean Sea and arrived back in Rota on 5 February where she remained until the 8th. Between 11 and 14 February, she visited Brest, France, where she participated in a gun salute symbolic of the first salute ever fired to the flag of the independent United States. From there, she set course-via the Azores and Bermuda- to return to Charleston. Valdez reentered her home port on 25 February.

After leave and upkeep, she resumed normal 2d Fleet operations out of Charleston. That duty lasted until September when she began preparations for another 6th Fleet deployment.

On 4 October, she stood out of Charleston and arrived in Rota 10 days later. On the 16th, Valdez reentered the Mediterranean. The ship spent the remainder of the year and the initial months of 1977 engaged in operations with the 6th Fleet. Valdez returned to Charleston on 21 April and commenced 30 days of leave and upkeep.

Following a summer devoted to operations off the east coast, the fleet frigate began preparations for another overseas period, this time a deployment to the North Atlantic. She departed Charleston on 27 September to join a NATO task group for Exercise "Combined Effort." During the next two months, Valdez engaged in other NATO exercises at sea interspersed with port visits. Her ports of call included Lisbon, Portugal; Portsmouth, England; Amsterdam, the Netherlands; Bremerhaven, Germany; and Cherbourg, France. Valdez returned to Charleston on 2 December and remained there into the new year.

The ship got underway on 16 January 1978 for a three-month good will cruise to West Africa and South America. Countries on her agenda consisted of Morocco, Guinea-Bissau, Liberia, Togo, Ivory Coast, Nigeria, Senegal, and Brazil. Valdez returned to Charleston on 18 April. A month of repairs and leave followed. The summer was spent conducting operations out of her home port. On 12 September, Valdez departed Charleston for Boston where she commenced a regular overhaul on 15 September at the Bethlehem Steel shipyard. The ship remained there into 1979.