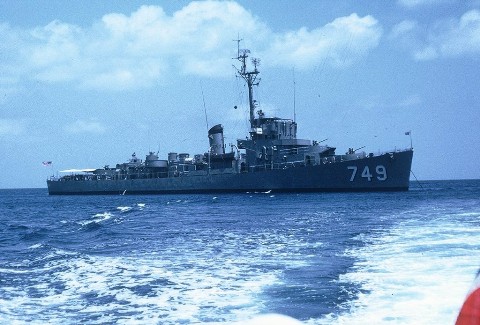 Following shakedown off southern California Roberts sailed for Pearl Harbor on 30 November. On her arrival 10 December she joined a hunter-killer (HUK) group operating with Corregidor (CVE-58); and for the next 3 weeks patrolled to the north and east of Hawaii. During January and early February 1945 her group operated to the west primarily in the Marshalls then returned to Pearl Harbor. From 1 to 18 March the group searched unsuccessfully between Johnston Island and Kwajalein for an overdue Army Air Corps transport carrying Lt. Gen. M. F. Harmon USA. Toward the end of the month the ships replenished at Majuro then resumed HUK operations this time in the Marshalls.

Detached at the end of April Roberts proceeded to Ulithi whence she departed 12 May for Okinawa. Screening Nehenta Bay (CVE-74) en route she arrived at midmonth. On the 16th she joined Natoma Bay (CVE-62) and screened her until the 31st. On the 31st she escorted Gilbert Islands (CVE-107) then on 1 June departed the Ryukyus to escort Makin Island (CVE-93) to Guam.

arrived at Guam on the 5th steamed to Eniwetok and on the 27th resumed HUK operations with Kasaan Bay (CVE-69). Into July the group patrolled the shipping lanes of Micronesia then toward the end of the month shifted to the Philippine Sea.

In early August Roberts returned to Guam for repairs. On the 15th hostilities ceased and Roberts was assigned to duty in the western Pacific.

During September she escorted landing craft of the 5th Fleet's amphibious force from Saipan to Nagasaki; then in October screened transports from Luzon to Sasebo. On 18 October she departed Japan for the United States.

The destroyer escort arrived at San Diego 10 November then continued on to the Atlantic coast for preinactivation overhaul. In January 1946 she moved from Norfolk to Green Cove Springs Fla. where she joined other ships waiting to berth with the "mothball fleet." In January 1947 however she was ordered to the 5th Naval District for reserve training duty.

On 2 March Roberts arrived at Norfolk and on the 3d she was decommissioned and placed "in service in reserve." For the remainder of the decade she served in that capacity and conducted reserve training cruises along the Atlantic coast and in the Caribbean.

In June 1950 war broke out in Korea. On 13 August Roberts was recommissioned in reserve and 1 December she was placed in commission active. Continuing her training duties she expanded her operations including fleet maneuvers on a large scale in her cruises. In June 1952 she extended her training cruises to the Mediterranean and in 1953 she participated in NATO exercises. In the summer of 1954 an extended cruise took her to South American ports while her 2-week cruises ranged from Nova Scotia to Florida and in the Caribbean

Until October 1961 Roberts continued her reserve training duty. Then with the Berlin Crisis the Selected Reserve was called to active duty and Roberts was assigned to the newly formed escort squadron CortRon 12 based at Norfolk. On 1 August 1962 after the release of her reserve crew she returned to Reserve Destroyer Squadron 34 and resumed Naval Reserve training.

Decommissioned and placed in service once again on 1 October 1964 Roberts contined her reserve training work limiting her cruises to weekends and 2 weeks until she was placed out of service on 21 September 1968. Her name was struck from the Navy list 2 days later.


Add Your Name to the
DE-749 Crew Roster