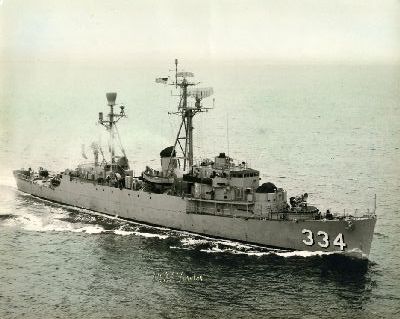 Beginning her convoy escort duty in the Atlantic, Forster sailed from Norfolk 23 March 1944 in a convoy bound for Bizerte. Off the north African coast 11 April, her group came under heavy attack from German bombers, several of which Forster splashed. When Holder (DE-401) was torpedoed by a submarine during the air attack, Forster stood by the stricken ship, firing a protective antiaircraft cover and taking off her wounded.

Forster returned to New York 11 May 1944, and during the next year, made six voyages across the Atlantic to escort convoys to Bizerte, England, and France. Between these missions, she served as school-ship for precommissioning crews for new construction and gave escort services along the east coast and to Bermuda. On 20 June 1945, she sailed from New York for training in Chesapeake and Guantanamo Bays en route to San Diego and Pearl Harbor, where she arrived 25 July.

Forster departed Pearl Harbor 30 August 1945 for occupation duty in the western Pacific, primarily escort assignments between the Marianas and Japan. She sailed for home from Guam 9 January 1946, reaching Philadelphia 12 February. Forster was decommissioned and placed in reserve at Green Cove Springs 15 June 1946.

Between 20 June 1951 and 25 May 1954, Forster was in commission in the Coast Guard, serving on weather station duty out of Honolulu, and once voyaging to Japan. She returned to reserve in naval custody until recommissioned at Long Beach, Calif., 23 October 1956. After training, she joined Escort Squadron 5 at Seattle, Wash., for radar picket duty in the continental air defense system. She continued similar duty from Pearl Harbor, her home port from 20 June 1958, serving in the Pacific Barrier, a distant early warning line of picket ships and aircraft operating from Hawaii to Alaska. Through 1962, Forster alternated periods on demanding patrol duty with necessary maintenance at Pearl Harbor, occasionally calling at Alaskan ports.


Add Your Name to the
DE-334 Crew Roster