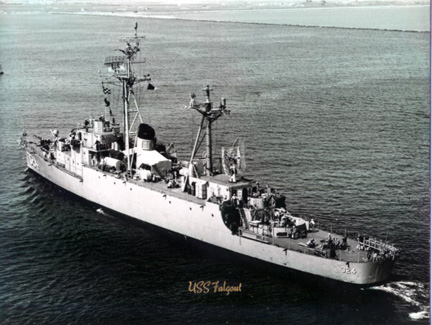 Final Disposition:Sunk as target off California on 12 January 1977

While bound for shakedown at Bermuda, on 4 December 1943 Falgout rescued from a lifeboat eleven survivors of the torpedoed tanker SS Touchet. Completing her shakedown, she began Atlantic convoy escort duty out of Norfolk and New York to North African ports, making eight such voyages between 3 February 1944 and 2 June 1945.

On 20 April 1944, in the Mediterranean, her convoy came under heavy attack by German aircraft. Before the concentrated antiaircraft fire of Falgout and the other escorts could drive them off, they blew up an ammunition ship, sank a destroyer, and damaged several of the merchantmen. With the other escorts picking up survivors or escorting the damaged ships into the nearest port, Algiers, Falgout screened the convoy on to its original destination, Bizerte. The homeward bound passage of this same voyage was also a difficult one; on 3 May, one of the escorts was torpedoed and had to put into Algiers for repairs. Two of the other escorts sank the submarine which had crippled their sister, but on 5 May, another of the escort was torpedoed, and sank. Falgout and the remaining escorts brought the convoy safely home, not a merchantman lost. On her third convoy voyage, while Gibraltar-bound in the Mediterranean, Falgout took prisoner from the sea four downed German aviators.

Falgout arrived at Balboa, C.Z., 25 June 1945, where she remained until 13 December, making good will visits to Nicaragua and Costa Rica, joining in defense problems, and training submarines. She returned to Charleston, S.C., 18 December, and on 9 February 1946 arrived at Green Cove Springs, where she was placed in commission in reserve 9 May 1946, and out of commission in reserve 18 April 1947.

Falgout was on loan to the Coast Guard between 24 August 1951 and 21 May 1954, in commission for duty as an ocean station vessel out of Tacoma, Wash. Upon her return to the Navy, she was converted to a radar picket escort vessel, and was recommissioned 30 June 1955, Lieutenant Commander Walter P. Smiley in command. After shakedown, she arrived at Seattle 20 November for duty with the Continental Air Defense Command. Her primary mission was to serve as radar picket in the Early Warning System, and from Seattle, she served regular cycles of duty at sea on picket station. This vital mission was interrupted only for necessary overhauls and refresher training following them. From 19 March 1959 through 1962, Falgout was based at Pearl Harbor, continuing her protection of the United States through service on the Pacific Barrier.


Add Your Name to the
DE-324 Crew Roster