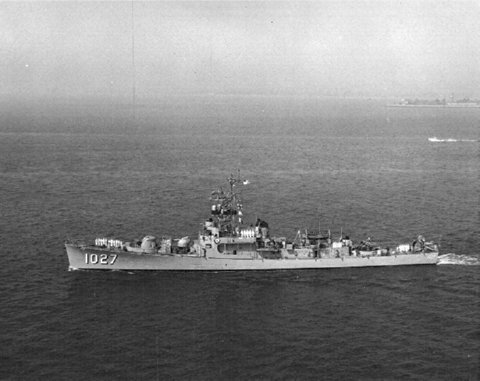 John Willis reported to Newport, R.I., 7 April for duty with the Atlantic Fleet. Following 2 months of shakedown along the Atlantic coast and in the Caribbean, she departed Guantanamo Bay, Cuba, 7 June for a 5-week cruise to Northern Europe that carried her to Dutch, German, and Danish ports on the North and Baltic Seas. Upon her return to Newport 14 July, she commenced 10 months of ASW exercises along the Atlantic coast in preparation for deployment with the 6th Fleet in the Mediterranean.

She steamed from Newport 12 May 1958 for the Mediterranean; and following her arrival at Gibraltar 21 May, she sailed with units of the 6th Fleet to participate in joint NATO antisubmarine exercises in the Eastern Mediterranean. The pro-Western government of Iraq fell to Arab nationalists 14 July, and on the 15th President Chamoun of Lebanon requested U.S. aid to thwart the possible overthrow of his government. In response President Eisenhower dispatched the 6th Fleet to Lebanon and ordered Marines to land at Beirut to protect "Lebanon's territorial integrity and independence." John Willis joined the Lebanon Patrol 18 July and for the next 2 months remained on intermittent patrol. As the Middle East crisis eased in September, John Willis departed the Eastern Mediterranean 14 September and sailed for the United States, putting into Newport 7 October.

On 29 November she entered the New York Shipyard to receive an experimental model of the Variable Depth Sonar (VDS) and thus became the first of the destroyer escorts to employ this latest development in ASW equipment. Resuming her operations 4 February 1959, she spent the remainder of 1959 and the early part of 1960 testing and evaluating the new equipment and conducting ASW exercises along the Atlantic coast from Newfoundland to Key West. Following a demonstration of the VDS for the Second Inter-American Naval Conference at Key West in late May, John Willis joined the Atlantic Fleet for 4 months of American and NATO Operations "Sea Spray" and "Sword Thrust," in the North Atlantic. She retired to Plymouth, England, 2 October but on the 10th rejoined the NATO forces for Exercise "Pipe Down."

John Willis returned to Newport 20 October and resumed coastal operations. On 8 May 1961 she sailed to Guantanamo Bay for patrol duty along the Windward Passage of the Caribbean. Following the assassination of Dominican Dictator Trujillo 27 May, she conducted patrols along the coast of the Dominican Republic. She departed the Caribbean 25 June and sailed via Key West for homeport. She returned to the Caribbean 2 December after participating in the recovery of the Project Mercury MA-5 spacecraft, which on 29 November twice orbited the earth with a chimpanzee, Enos, on board.

In response to a request for aid by President Balaguer, who feared that supporters of slain Dictator Trujillo would topple the democratic government in the Dominican Republic, President Kennedy ordered units of the Atlantic Fleet into the area to illustrate America's support for the established government. John Willis sailed to the Dominican Republic 2 December and commenced 7 days of patrol duty after which she returned to Newport to prepare for another cruise to Northern Europe.

She sailed for Portsmouth, England, 8 January 1962 and reached the English coast 19 January. While sailing the North Sea on the 23d enroute to Horton, Norway, she assisted units of the British Navy during search and rescue operations for stricken Norwegian ship, Eystein. John Willis put into Horton 24 January and for 3 weeks sailed to several Norwegian ports while officers and engineers of the Norwegian Navy studied the construction details and operational characteristics of this Dealey class DE, which had been selected as the prototype for five new Norwegian warships. Upon completion of her Norwegian cruise, she sailed 15 February for the United States and arrived Newport 3 March.

John Willis resumed ASW and convoy escort exercises out of Newport and during August received additional ASW equipment. Following 4 months of extensive overhaul, she steamed to the Caribbean 1 March 1963 for an operational readiness inspection. After returning to Newport 8 April, she commenced operations 15 April with a NATO force of 30 ships, engaged in ASW Exercise, "New Broom Eleven," in the North Atlantic. After her return to Newport 25 April, she began G months of intermittent training in preparation for an Atlantic Fleet amphibious Exercise, "Phibaswex," scheduled for December. During this training period she conducted convoy escort and ASW maneuvers from Narragansett Bay to Guantanamo Bay; she attended the ASW Tactical School at Norfolk; and she served as a training ship at the Fleet Sonar School at Key West. While engaging in maneuvers designed to detect and destroy nuclear submarines, John Willis provided search and rescue assistance 23 September for a MATS plane, which was lost in the North Atlantic on a flight from Dover, Del., to the Azores.

John Willis steamed from Newport 2 December with Escort Squadron 10 and joined Task Force 180 for amphibious exercise at Vieques in the West Indies. During this exercise she conducted barrier patrols and practiced the latest ASW techniques against nuclear and conventional submarines. On the 17th she was released from the completed exercise and she returned to Newport.

For the next 3 years John Willis continued to operate along the Atlantic Coast and in the Caribbean while taking part in squadron exercises and serving as school ship at Key West. During the latter half of 1964 and 1965 she participated in UNITAS V and UNITAS VI and made two cruises along the coasts of South America as part of the U.S. sponsored "People-to-People" Program. Between January and June 1966 she underwent extensive overhaul at Boston where she received HASH capabilities and communications alterations: thence she resumed refresher and readiness training out of Newport. Assigned to Escort Squadron 8, she deployed to European water 29 May 1967. After arriving off the Norwegian coast early in June, she operated along the coast of Western Europe during the next month before sailing to join the ever ready and powerful ships of the 6th Fleet in the Mediterranean.