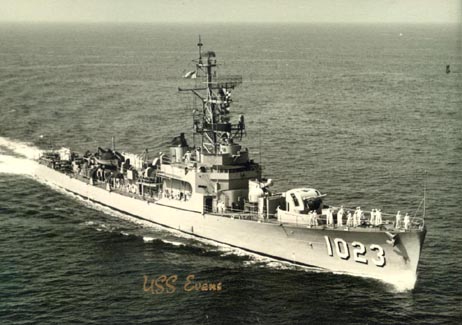 Evans arrived at San Diego, her home port, 4 August 1957, and began shakedown operations along the west coast. Her first lengthy deployment, from 21 January 1958 to 27 June, found her serving with Commander, Naval Forces Marianas, for duty in the administration of Pacific territories held by the United States in trust under the United Nations. She proceeded to visit Japan, Hong Kong, and the Philippines, and to train with ships of the navy of the Republic of Korea.

During her second tour of duty in the Far East, from 8 January 1959 to 13 June, Evans hove to in Leyte Gulf 7 February to conduct memorial services for her namesake, Commander Ernest Evans. She exercised with the navy of the Republic of the Philippines, patrolled the Taiwan Straits, served briefly as station ship at Hong Kong, and joined in exercises off Okinawa during the remainder of her tour. On 14 April 1960, Evans again climaxed a west coast training period by sailing for the western Pacific on a tour of duty which continued until 21 July 1960. She then returned to operations off the coast for the remainder of the year.