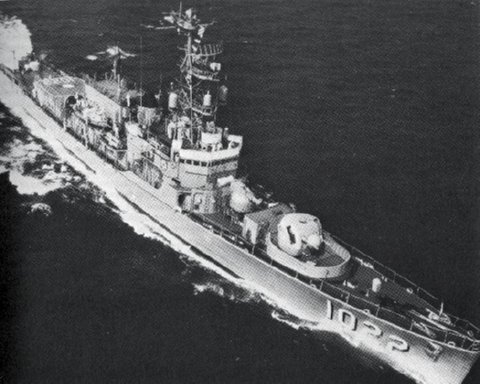 After shakedown cruise, Lester arrived in Newport, R.I., just before Christmas 1957, reporting for duty to Escort Squadron 14. She trained off New England until 8 February 1958, and then participated in convoy and ASW exercises off the Florida coast. On 17 February she steamed from Savannah, Ga., to rescue the survivors of the sunken Italian oreship Bonitoz, and then returned to Newport. On 12 May the DE departed for the Mediterranean with units of CORTRONs 14 and 10 and carrier Wasp. She arrived in Gibraltar 21 May joining the 6th Meet. When the fleet acted in Lebanon and perhaps averted world crisis in July, Lester played an important role in barrier patrol and other duties supporting the operations.

Lester departed Gibraltar 29 September, arriving Newport 7 October. For the next 3 months she participated in three ASW exercises with Task Group Charlie, a force of ASW professionals which had the vital mission of improving convoy tactics and doctrines

Lester next sailed from Newport 6 February 1959 to join TF 86 at Trinidad. She departed Trinidad 21 February on a combination ASW training and good will cruise to Latin America. The cruise was intended to implement hemisphere defenses and provide practical experience for the four maritime nations of eastern South America. Upon her return to Newport 5 May, she proceeded to Boston for overhaul, remaining there for the rest of the summer. She was back at Newport in early September, and sailed on the 11th for refresher training exercises at Guantanamo Bay. During this period the ship operated with units of the British, Dutch, and Greek Navies. She returned to Newport 20 October for one more exercise with Task Group Charlie.

January 1960 found Lester participating in operation Springboard in the Caribbean. The following months were spent in convoy and individual exercises developing ASW tactics. During September and October the ship steamed to northern Europe to take part in NATO fall convoy exercises, after which she returned to Newport to prepare for the 1961 operation Springboard. After a brief operation in the North Atlantic, Lester overhauled at Boston from September to 20 November, then cruised to Guantanamo Bay for refresher training.

For the next 2 years Lester continued similar operations. A highlight was UNITAS III, on ASW exercises with South American navies. Departing 16 August 1962 she steamed over 18,000 miles and received more than 20,000 visitors. Lester entered Boston Naval Shipyard 12 September for a major conversion to improve her ASW capabilities.

Lester resumed operations from Newport 22 January 1964. These included a joint United States-Canadian ASW operation in May and another in September following her assignment to newly formed Escort Squadron 8. In late January 1965, Lester left for Key West for surveillance duty and to provide school services for the Fleet Sonar School. She returned to Newport in late February, and 16 March departed for operation Springboard. She joined a United States-Canadian exercise in May, and again in June for operation Pole Star. After a brief operation in July, the vessel entered Boston Naval Shipyard for a restricted availability period. On the day before Thanksgiving Lester returned to Newport to resume her vital peacetime training mission.

On 31 January 1966, Lester began 7 months of participation in the Destroyer Escort Petty Officer Training Program, better preparing over one hundred nonrated men for their eventual advancement to petty officer. In June she also demonstrated the Navy's capabilities to cadets from the U.S. Military Academy at West Point. On 15 October she again entered Boston Naval Shipyard for overhaul.

The overhaul was completed on 24 January 1967, and Lester operated locally until sailing south in March. She served as Sonar School Ship, Key West, Fla., prior to refresher training out of Guantanamo Bay, Cuba, through April. Spending May in Newport, Lester departed on the 29th for deployment to northern Europe and the Mediterranean. She returned late in September and spent the remainder of the year in local operations out of Newport. February through June 1968 saw another voyage to north European and Mediterranean waters. Into 1969, Lester continued her vital peacekeeping operations and readiness exercises out of her home port, Newport.