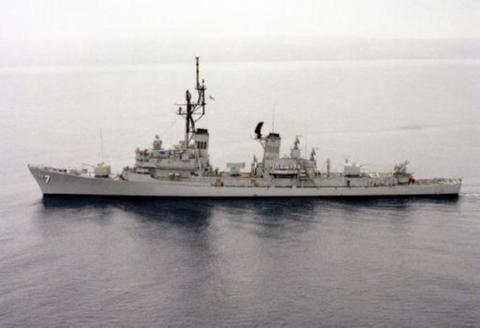 One of a new class of destroyers built from the keel up to fire guided missiles, Henry B. Wilson was the first ship of her size to be side-launched and when launched was the largest warship ever constructed on the Great Lakes. Because of these unique circumstances, she was christened not with the traditional champagne but with a bottle filled with water from the Great Lakes, the St. Lawrence River, and the Atlantic Ocean. Following shakedown in the Caribbean she arrived in early May 1961 at her new home port, San Diego. During the months that followed Henry B. Wilson conducted tests and drills of her missile systems, fleet exercises, and type training.

The guided missile destroyer sailed 6 January 1962 for duty in the Western Pacific, the first ship in that region to be armed with Tartar missiles. Stopping at Pearl Harbor and Yokosuka, she carried out antisubmarine exercises until returning to the United States 19 July 1962.

Training off the California coast, punctuated with several missile firings, occupied Henry B. Wilson until 17 October 1963, when she sailed with carrier Kitty Hawk for duty with 7th Fleet in the Western Pacific. During the next 5 months she operated as part of America's mobil peacekeeping fleet between Japan and the Philippines. After returning to San Diego 16 April 1964, she resumed ASW and fire support operations.

Henry B. Wilson sailed on her third deployment to the Far East 4 June 1965. Arriving Subic Bay, Luzon, 21 June, she became flagship for Destroyer Squadron 21, then began rescue and air defense picket duty in the Gulf of Tonkin 31 July, along with shore bombardment support. As escort for Midway (CV-41), she departed Subic Bay 7 November and arrived San Diego the 24th.

After a year's operation off the West Coast, Henry B. Wilson departed San Diego for the Far East 5 November 1966. She resume picket duty off Vietnam 23 December. During the first 3 months of 1967 she cruised the South China Sea and Gulf of Tonkin, performing search and rescue missions and pounding enemy coastal positions in support of ground operations. She returned to San Diego early in May.


Add Your Name to the
DDG-7 Crew Roster