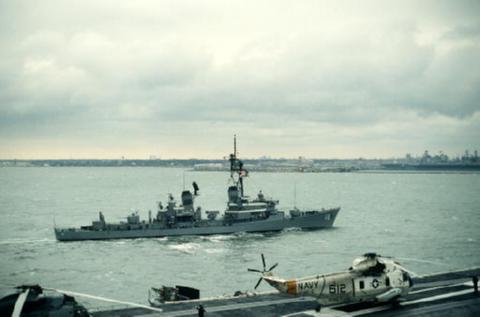 Following shakedown, Semmes joined Destroyer Division (DesDiv) 62, Destroyer Squadron (DesRon) 6, at Charleston, S.C., in July 1963; and, into the summer of 1964, participated in various fleet exercises in the Atlantic and Caribbean. Toward the end of that summer, she sailed east for a six-week NATO exercise, Masterstroke/Teamwork, in the North Atlantic-Norwegian Sea area; and, on 22 September, she crossed the Arctic Circle. Two months later, on 28 November, she deployed to the Mediterranean for her first tour, of four months, with the 6th Fleet. She returned to Charleston in time to participate in the 2d Fleet's exercises during the spring of 1965. She then took part in support operations off the Dominican Republic.

From February to July 1966, the guided missile destroyer conducted her second tour with the 6th Fleet; and, on her return to the United States, changed her home port from Charleston to Norfolk, effective 1 August, in anticipation of her first major overhaul at the Norfolk Naval Shipyard. In April 1967, Semmes resumed operations with refresher training in the Caribbean. In July, she rejoined DesRon 6 at Charleston; and, in August, she deployed for her third tour with the 6th Fleet. She participated in fleet and NATO exercises into January 1968; then returned to Charleston, arriving on the 31st for a month's rest before resuming operations in the Caribbean and off the east coast.

On 10 June, Semmes again sailed east. During that month and into July, she visited Germany and Denmark; then turned south for another 6th Fleet deployment. On 15 November, she was relieved by John King (DDG-3) at Rota, Spain; and, 11 days later, she returned to Charleston where she remained in port for the rest of the year.

In January 1969, she cleared Charleston to oarticipate in ASW and Springboard exercises in the Puerto Rican operating area; then returned to her homeport. In April, she returned to the Caribbean for 2d Fleet exercises.

Through the summer, Semmes continued to conduct exercises in the Caribbean and off the southeastern seaboard. In late September, she again crossed the Atlantic for a seven-month deployment with the 6th Fleet; and, on 10 February 1970, while moored at Naples, she was struck by the Greek freighter, SS Mautric. The damage sustained to her bow was quickly repaired; and, before the end of the month, she had resumed operations. By mid-March, she had arrived at Barcelona for turnover with Conyngham (DDG-17). On the 18th, she departed the Mediterranean; and, on the 28th, she returned to Charleston.

During 1971, her schedule remained basically the same; but her annual tour with the 6th Fleet, 16 July to 11 October, was followed by visits to the Netherlands and to Denmark for binational and NATO operations. On 20 December, Semmes returned to South Carolina; and, in January 1972, she entered the Charleston Naval Shipyard for conversion of her engineering plant to the Navy Distillate Fuel Oil System. With the spring, she resumed operations off the east coast and in the Caribbean. In September, she participated in NATO exercise "Strong Express," which again took her above the Arctic Circle and which was followed by visits to Norway and Denmark. In October, she returned to Charleston. In November, she conducted exercises in the Caribbean; and, in December, she prepared for another deployment in the Mediterranean with NATO's Standing Naval Force, Atlantic.

After sea trials in the Charleston operating area, Semmes got underway from that port on 4 January 1973. She arrived in Portsmouth, England, on the 15th, joining the NATO naval force there. For the next seven months, the guided missile destroyer cruised the Atlantic visiting ports on both sides of that ocean and participating in three exercises: NATO Exercise Sunny Seas, in January and February; Canadian Exercise MARCOT 2/73, in April and May; and Norwegian Exercise Midnight Sun in June. On 1 July, Semmes changed operational control back to the 2d Fleet and, nine days later, returned to Charleston.

Following a month of post-deployment standdown, from 10 July until 10 August, she resumed operations along the eastern seaboard and in the Caribbean. In November and December, she took part in Exercises "Fun in the Sun" and LANTREADEX 2-74. Semmes reentered Charleston on 19 December to prepare for overhaul. As of 31 July 1974, she is still in Charleston completing overhaul.


Add Your Name to the
DDG-18 Crew Roster