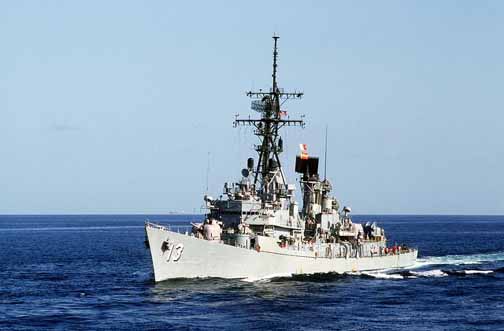 The USS HOEL (DDG-13), a Charles F. Adams-class guided missile destroyer, was commissioned on 16 JUN 1962. USS HOEL was built by the Defoe Shipbuilding Co. of Bay City, MI. Defoe was the builder of three other Charles F. Adams DDGs. HOEL sailed from Boston after fit out to her homport of San Diego, Ca, arriving in September 1962. USS HOEL deployed numerous times to the Western Pacific over the next twenty seven years. Her early "West Pacs" had a eastern terminus in Vietnamese waters, providing shore bombardment and picket duty for the US aircraft carriers operating at Yankee Station. Her later "West Pacs" extended into the "IO" (Indian Ocean) as the US Navy presence grew after Iranian Hostage Crisis. HOEL was decommissioned just before Desert Shield/Desert Storm. USS HOEL served her country for 28 years, 3 months and 15 days, until decommissioned on 1 OCT 1990. HOEL's post service career was unusual. Purchased to become a "power barge", she was moved to Brazil in an attempt to provide "municipal" power to Manaus, Brazil. The enterprise was a failure and her hulk was last report anchored in the Amazon River near Manaus.

Final Disposition:Sold to Charleston Shipbuilders Inc. for conversion to a power barge scrapped in Brazil.

After fitting out at Boston, Hoel got underway for her first homeport, San Diego, putting in at Norfolk; May-port and Fort Lauderdale, Fla.; Guantanamo Bay; Cartagena, Colombia; Canal Zone; and Acapuloo, Mexico, during the voyage. During the passage from Cartagena to the Canal Zone she came upon sailing yacht Stardrift becalmed and adrift enroute to Sidney, Australia, from London. Hoel towed the 36-foot craft 100 miles to safety in Panama.

Hoel arrived San Diego 11 September 1962 and spent the ensuing months completing the various inspections, tests, and trials by the Board of Inspection and Survey. When successful firing of ASROC and TARTAR missiles completed her qualification and acceptance trials, Hoel joined the ready 1st Fleet.

After a 3-week cruise to Esquimau, Canada, Hoel spent April and May of 1963 in Pearl Harbor conducting specialexercises. She then returned to waters off San Diego to participate in the Presidential Demonstration held for President Kennedy.

The months of July, August, and part of September were spent at Long Beach Naval Shipyard for the post-shakedown availability assigned each new ship approximately 1 year after commissioning. At this time improved fire-control radars were installed and tested by successful missile firings. Hoel departed Long Beach 17 October 1963 for duty in the Western Pacific to serve as the flagship of Commander Destroyer Division 12.

In ensuing years she alternated deployments in the Far East with operations off the West Coast. Her 1966 deployment to the Western Pacific began when she departed San Diego 28 July. On September she was on search and rescue patrol off Da Nang, Vietnam. On 8 December the guided missile destroyer became naval gunfire support ship in the Corps I area. She fired 2,100 rounds destroying at least 20 enemy structures and 2 trench networks; damaging 61 buildings, 3 bunkers, 8 trench networks, and 5 roads; and killing 24 Viet Cong while wounding 7. Hoel retired to Hong Kong 21 December but headed for Yankee Station the day after Christmas to screen Coral Sea (CVA-43). On this patrol she helped to rescue a pilot after his A.-A Sky Hawk had crashed.

Hoel returned to San Diego 3 February 1967 and operated on the West Coast through mid-year preparing for future action.


Add Your Name to the
DDG-13 Crew Roster