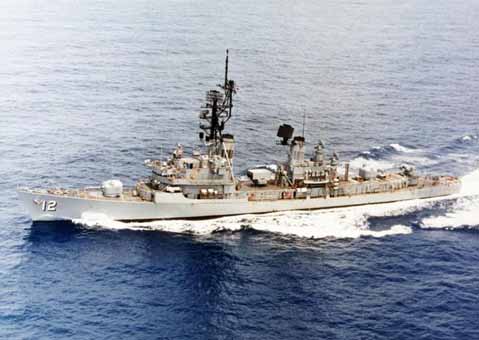 The USS ROBISON (DDG-12), a Charles F. Adams-class guided missle destroyer, was commissioned on 9 DEC 1961. USS ROBISON was built at Defoe Shipbuilding Company in Bay City, Michigan, commissioned in Boston, then initially homeported in San Diego. the end of 1963 began the regular deployments that marked ROBISON's career. Her 1960s deployments usually placed her as part of a screening force around the aircraft carriers at Yankee Station. ROBISON, when the opportunity arose, provided shore bombardment and destroyed light enemy supply craft in Vietnamese waters. After Vietnam, ROBISON resumed a regular cycle of "West Pacs", standing her "watches" in the Far East. USS ROBISON made a total seventeen deployments always "In War...In Peace...In Readiness". USS ROBISON served her country for 29 years, 9 months and 22 days, until decommissioned on 1 OCT 1991. The hulk of ROBISON was sold to Consolidated Minerals for conversion into a "power barge", but the scheme failed to pan out and she was scrapped in 1996.

Final Disposition:Sold for scrap on 20 June 1994

Robison steamed for the west coast 29 January 1962 via the Panama Canal. On 1 March she received a message diverting her to Clipperton Island, to rescue 10 stranded seamen from the tuna boat Monarch, which had capsized 20 days earlier.

Following completion of availability 31 July, Robison proceeded to Mare Island for ammunition, took on ASROC and Tartar missiles at Seal Beach, and then commenced 3 months of local training operations out of San Diego. She got underway with Cruiser-Destroyer Flotilla 11 on 13 November for her first WestPac tour of duty. Upon completion of this deployment, Robison arrived San Diego 21 June 1963 for coastal operations.

Local spring operations were followed by a midshipman training cruise from 10 June to 5 August. The latter month also brought a call at Portland, Oreg., and a visit, on the 24th, by the Chief of Naval Operations, Adm. David L. McDonald. In the fall she sharpened her ASW, AAW, and shore bombardment techniques during coastal operations. Early in the new year 1966, the destroyer prepared for her third tour of duty in support of 7th Fleet operations in WestPac.

That deployment ended with her return to San Diego 18 July 1966. Overhaul in San Francisco took her through the fall and into the winter months, culminating in her return to homeport on 3 February 1967. Refresher and type training filled the next 5 months, and 25 July saw Robison once again en route to the Orient.

After calling at Pearl Harbor 31 July and Yokosuka, Japan, 5 August, she commenced Tonkin Gulf operations 25 August in the screen for Coral Sea (CVA-43). In naval gunfire support and "Sea Dragon" operations during the period from 26 August 1967 to 9 January 1968, Robison was credited with the destruction of 78 waterborne logistics craft. Her remarkable degree of combat readiness during this period earned for her the Meritorious Unit Commendation.

Upkeep, availability, training, and operating off the west coast maintained Robison's state of readiness through the next 11 months. She steamed from San Diego for her fifth WestPac deployment on 30 December 1968 in company with carrier Kitty Hawk (CVA-63). The usual call at Pearl Harbor was followed by arrival at Subic Bay, 20 January 1969. After voyage repairs Robison joined Task Group 77.3 in Tonkin Gulf. The destroyer, flagship of her division, served in the screen of both Kitty Hawk and Bon Homme Richard (CVA-31). She also provided naval gunfire support to troops ashore in the I Corps Zone.

Robison returned to San Diego on 6 July 1969, remaining there until 2 October, when she arrived at the San Francisco Naval Shipyard, Hunters Point, for overhaul. Work was completed 4˝ months later, and Robison returned to her homeport of San Diego 27 February 1970, ready for refresher training and yet another WestPac deployment.

With the advent of 1970, Robison began a cycle of deployments which endured for three years. She spent the spring of each year on the west coast of the United States and then, in late spring or early summer, she deployed to WestPac. This cycle continued until 1973. During that year she remained on the west coast, engaged in normal operations out of San Diego, where she is berthed as of January 1974. The guided missile destroyer decommissioned on 1 October 1991, was struck from the navy list on 20 November 1992 and sold to Consolidated Metals, Inc., for scrapping.


Add Your Name to the
DDG-12 Crew Roster