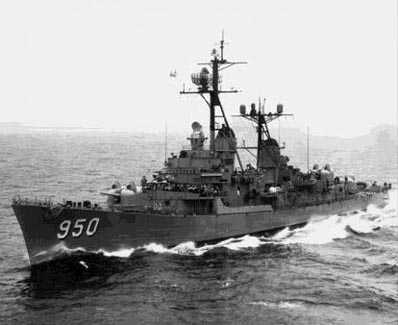 Final Disposition:Sunk as a target off Kauai in Hawaii on 12 May 1997

Richard S. Edwards shakedown took her to Valparaiso Chile then back to San Diego 13 May 1959. She then deployed to the western Pacific area where she operated with the fast carrier units of the 7th Fleet and as a member of the U.S. Taiwan Patrol Force. She returned to the west coast 13 May 1960 and operated there until deploying to the western Pacific again in February 1961 to operate with the fast carrier group in the South China Sea. She returned to San Diego 14 September 1961.

In late January 1969 Richard S Edwards deployed to WestPac again to operate off Vietnam She returned to San Diego 13 August 1969 until being decommissioned at Long Beach Calif. 27 February 1970. She immediately entered Long Beach Naval Shipyard and underwent ASW modernization. By December she was participating in sea trials in anticipation of her recommissioning which occurred 15 January 1971. She embarked 4 March for Pearl Harbor Hawaii her new home port and continued operations in that vicinity until April 1972.

Receiving only 72 hours notice Richard S Edwards sailed from Pearl Harbor 10 April 1972 for the western Pacific and deployment off the Vietnamese coast. She remained in the area either on the gunline or cruising with the carriers as escort and plane guard until November. She re-entered Pearl Harbor 10 November 1972 and has remained there throughout 1973 and into 1974.


Add Your Name to the
DD-950 Crew Roster