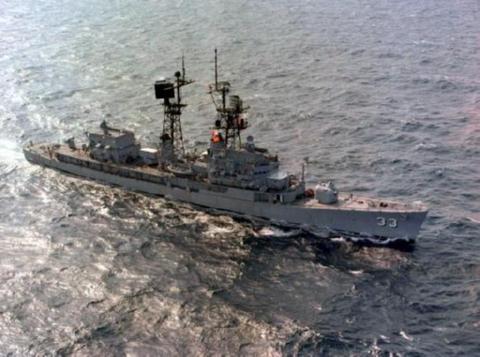 Final Disposition:Sunk as a target 25 April 1989

After shakedown Parsons reported to her home port San Diego and commenced operations with the 1st Fleet in February 1960. In October she deployed to the Western Pacific with 7th Fleet units. She returned to resume West Coast operations in July 1961 and entered the Long Beach Naval Shipyard 6 October for major improvements in her communications and ASW equipment. She then rejoined the 1st Fleet in extensive coastal training from January to November 1962 deployed for her second WestPac tour in November and returned in July 1963 to the California coast.

During the summer and fall of 1963 she carried out AAW and ASW operations in the San Diego area. During November she escorted Midway (CVA-41) and Hancock (CVA-19) to the Western Pacific and returned to San Diego. Parsons continued her training and service operations alternately with the 1st and 7th fleets until selected for conversion to a Guided Missile Destroyer and decommissioned at the Long Beach Naval Shipyard 19 January 1966.

Parsons was Reclassified (DDG-33) 15 March 1967 and recommissioned 3 November 1967 assigned to the Cruiser-Destroyer Force Pacific Fleet. Following shakedown she carried out a rigorous testing program for her missile systems and in September 1968 she assumed duties as flagship for DesRon 31 and immediately deployed to the Western Pacific for operations with the 7th Fleet off Vietnam. Interspersed with her carrier escort duties on Yankee Station she conducted on-station training operations assuming duties as ASW training coordinator ship with Commander Destroyer Squadron 31 embarked. Parsons also visited Kaohsiung Yokosuka Hong Kong Singapore and Sasebo. She returned to San Diego 12 May 1969 to resume operations from there and train for her next deployment.

Into 1970 Parsons continues to serve the U.S. Navy.


Add Your Name to the
DD-949 Crew Roster