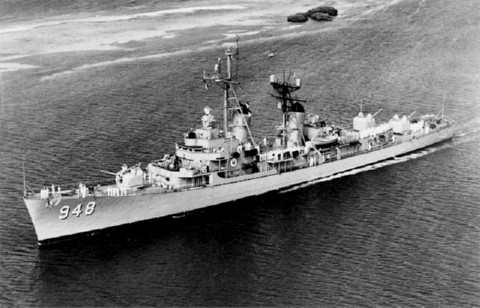 After a training cruise in the Caribbean Morton proceeded to the west coast arriving San Diego Calif.. 20 October 1959. She deployed to the western Pacific in January 1960 participated in "Blue Star " a joint Navy Marine Air Force amphibious operation in March and made a special "People-to-People" visit to Bombay India before returning to the west coast 31 May Departing San Diego 3 April she reported for 1 months duty in the Formosa Patrol during which time she participated in operation "Handclasp " carrying food medicine and clothing to the less fortunate people of free China. She returned to San Diego 28 September 1961 and continued operations off the west coast until sailing 13 November 1962 for another WestPac deployment. Following duty with the Formosa Patrol and operations off Japan she steamed home arriving San Diego 15 June 1963.

Morton continued operations off the west coast until August 1964 when she steamed to the South China Sea to support South Vietnam in its struggle against Communist aggression during which time she engaged hostile forces in the Gulf of Tonkin before returning to the west coast 6 February 1965.

Arriving off South Vietnam in April 1966 she shelled Vietcong supply points and encampments for the next 4 months. Morton resumed operations off Vietnam in May 1967. At first assigned to intercept Vietcong supply craft she later provided gunfire support for the 12th Marine Regiment near the DMZ returning to San Diego 3 November. Morton departed San Diego 31 October 1968 for WestPac where she continues to serve into 1969.


Add Your Name to the
DD-948 Crew Roster