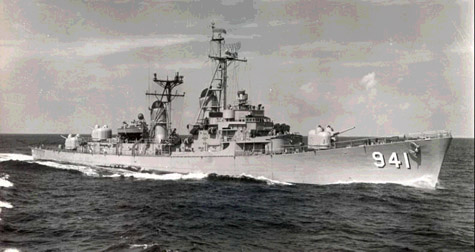 The USS DUPONT (DD-941), a Forrest Sherman class destroyer was commissioned on 1 JUL 1957. Built by the Bath Iron works in Bath, Maine, USS DUPONT was served with the Atlantic Fleet for the majority of her career. She deployed to the Mediterranean several times, the Great Lakes to celebrate the opening of the St. Lawrence Seaway and participated in the Cuban Missile Blockade in her first five years in service. The war in Vietnam called DUPONT to the Western Pacific in 1967-68. DUPONT spent the remainder of her career stationed on the East Coast and deploying routinely to the Indian Ocean and Lebanon. USS DUPONT served her country for 25 years, 8 months and 3 days, until decommissioned on 4 MAR 1983. The hulk of the DUPONT was scrapped in 1993.

Final Disposition:Sold for scrap to International Shipbreaking Limited at Brownsville in Texas on 10 February 1999

From 6 to 31 July 1958 Du Pont served on a midshipman cruise and antisubmarine exercises in the Atlantic duty broken by a visit to New York. Du Pont sailed 2 September for a tour of duty with the 6th Fleet in the Mediterranean during which she participated in highly realistic air defense and antisubmarine warfare problems. She returned to Norfolk 12 March 1959 to prepare for Operation "Inland Sea " the historic first passage of a naval task force into the Great Lakes through the Saint Lawrence Seaway. She escorted HMS Brittania with Queen Elisabeth II of England embarked during the dedicatory ceremonies of 26 June.

Du Pont crossed the Atlantic in August and September 1959 visiting Southhampton England after serving as plane guard for the transatlantic flight of President D. D. Eisenhower. On 28 January 1960 Du Pont sailed from Norfolk for a second tour of duty with the 6th Fleet in the Mediterranean returning to Norfolk on 31 August for an overhaul in the Naval Shipyard where she remained through the end of 1960.


Add Your Name to the
DD-941 Crew Roster