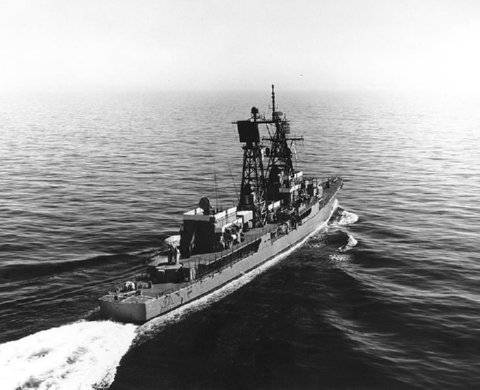 Decatur sailed from Newport 3 September 1957 to take part in NATO Operation "Strikeback " calling at Largs and Rosyth Scotland before returning to Newport 22 October. She served on local operations until 1 February l 958 when she sailed to the Mediterranean for a tour of duty with the 6th Fleet. She returned to her home port 28 August for east coast operations.

She returned to the Mediterranean for duty between 7 August 1959 and 26 February 1960 then joined in antisubmarine exercises and a midshipman cruise in the Atlantic between March and September. On 6 September Decatur sailed on a cruise which took her north of the Arctic Circle through the Mediterranean and the Suez Canal into the Arabian Sea and Indian Ocean and back to the Mediterranean where she operated with the 6th Fleet. The destroyer returned to Newport in mid-December.


Add Your Name to the
DD-936 Crew Roster