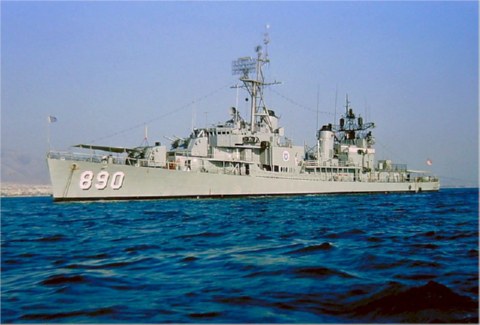 Following sea trials and shakedown exercises in the spring of 1946 Meredith was employed for a brief period in training submarine officers at New London Conn. before steaming south to serve as plane guard for Randolph during the 1946 midshipmen summer cruise. In the late fall she pointed her bow northward for operations off Newfoundland and Greenland. Remaining in the western Atlantic the following year she cruised from Maine to the Caribbean participating once again in a midshipmen training cruise. The first part of 1948 was spent in conducting experimental tests for the Operational Development Force after which in May she sailed with other ships of her squadron DesRon 6 for her first overseas deployment. From that time until 1953 she got underway in the spring of each year for the Mediterranean and duty with the 6th Fleet. Her 2d Fleet employment for the same period included Arctic maneuvers (November 1949) and several Caribbean cruises as well as training cruises with reservists and another midshipmen summer cruise (1952).

On 7 January 1953 Meredith entered the Norfolk Naval Shipyard for habitability conversion which lasted into November. She then resumed the alternation of duty tours with the 2d and 6th Fleets. During her 1958 oversee deployment she served briefly with the Middle East Force as she and HMS Loch Fyne stood by in the Euphrates Delta area after the Iraqi revolution of 15 July.

Toward the end of the following year Meredith reassigned to DesRon 14 was slated for FRAM (Fleet Rehabilitation and Modernization). Entering the Philadelphia Naval Shipyard 28 June 1960. she remained for 1 year and 2 days during which time her bridge was enclosed her torpedo deck was modified to allow the installation of ASROC and her 7-year-old 3-inch battery was replaced by a helicopter hanger and flight deck to accommodate the DASH (Drone Antisubmarine Helicopter) weapons system.

On 1 July 1961 the "new" Meredith sailed for her new home port Mayport Fla. After refresher training she got underway for a good will tour of various ports in the Caribbean and along the west coast of Africa from Freetown Sierra Leone to Capetown Republic of South Africa. While en route she collected oceanographic data which included piscatoral and avian surveys as well as hydrologic information. Returning to Mayport 18 February 1962 she further tested and evaluated the ASROC system before heading north to embark midshipmen for the fourth time. In August the destroyer once again transited the Atlantic for overseas deployment. This time as in 1958 part of that deployment (14 October to 1 December) was spent with MidEastFor the remainder In the Mediterranean. Since that time into 1969 Meredith has continued to rotate between duty in the Mediterranean and operations in the western Atlantic the latter of which in November 1965 brought her into the space age with an assignment to the Project Gemini Recovery Operations.


Add Your Name to the
DD-890 Crew Roster