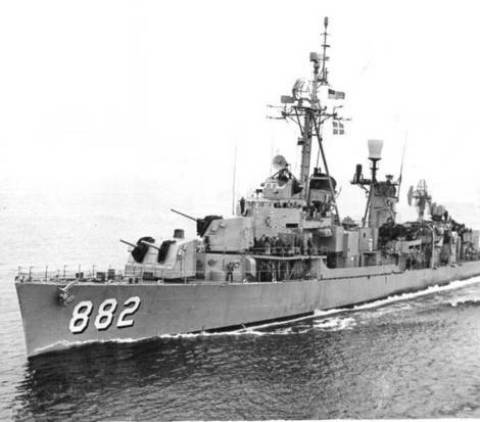 Furse sailed from Norfolk 7 November 1945 for occupation duty in the Far East calling at San Diego and Pearl Harbor en route to Tokyo Bay where she arrived 22 December. After acting as courier between Nagoya and Wakayama she conducted training operations out of Kobe then sailed back to Pearl Harbor to prepare for participation in Operation "Crossroads". In this operation atomic weapons tests in the Marshall Islands juring the summer of 1946 Furse acted as plane guard to carriers of JTF 1.

The destroyer returned to San Diego 12 August 1946 and until her transfer to the Atlantic Fleet in April 1949 operated on training along the west coast and completed another tour of duty in the Far East. She arrived at Newport R.I. 21 April 1949. On 10 September she sailed on the first of her tours of duty with the 6th Fleet in the Mediterranean which were annual aside from 1951 and 1959 through 1960. From January 1951 Furse was homeported at Norfolk Va.

Among the highlights of the destroyer's operations were visits to ports of northern Europe between September 1950 and December during which she represented the United States at the funeral of King Gustav V of Sweden. From 1952 onward she often served with the Operational Development Force perfecting techniques in antisubmarine warfare. A midshipman summer cruise in 1952 again took her to ports of northern Europe Marking her 1956 tour of duty in the Mediterranean was her participation in the evacuation of Americans from Israel and Egypt during the Suez Crisis and lengthy patrol duty in the eastern Mediterranean. The next year she made two tours of duty in the Mediterranean because of the tense political situation prevailing and in the summer of 1958 she sailed for NATO operations in northern waters, visiting Santander, Spain; Stavanger, Norway and Ghent, Belgium.

In the periods between her deployments Furse carried out the intensive training schedule of Destroyer Force Atlantic Fleet cruising the east coast and the Caribbean in operations with ships of all types and major fleet exercises.


Add Your Name to the
DD-882 Crew Roster