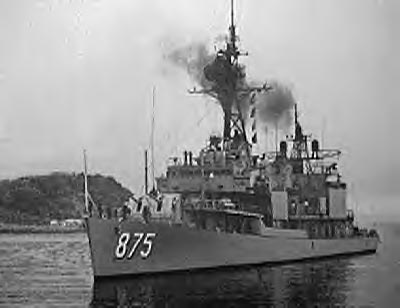 After shakedown Henry W. Tucker was converted to a radar picket destroyer and participated in radar and antiaircraft exercises off the Maine coast until sailing for Pearl Harbor 4 November. From the Hawaiian islands she continued to Yokosuka arriving 22 December to aid in the occupation of Japan and repatriation of Japanese nationals. Her first tour of duty in the Far East ended 25 March 1946 as she set course for her new homeport San Diego. In the next 3 years Henry W. Tucker made two more such cruises alternating them with tactical exercises and operations along the east coast. In March and April 1948 the destroyer patrolled off Eniwetok in connection with United States atomic tests in the Pacific islands. She was reclassified DDR-875 18 March 1949.

Undergoing overhaul at the time Communist troops launched their attack on South Korea in June 1950 Henry W. Tucker speeded up preparations and joined the fleet operating off Korea in November. After 5 months of hunter-killer and patrol operations she joined the screen for Task Force 77 a fast carrier force whose jets struck hard and often at enemy supply lines and troop concentrations. The destroyer also participated in shore bombardment and landed several raiding and intelligence parties on the western coast of the war-torn peninsula. On 28 June 1951 as she steamed into Wonsan Harbor Henry W Tucker was hit by six enemy shells. Two men were injured and extensive damage was done to her radar gear but the destroyer's return fire effectively silenced enemy shore batteries. Returning to San Diego 8 August Henry W. Tucker engaged in intensive training exercises before returning to Korea to join TF-77 off the east coast 25 March 1952. Screening and plane guard duty with the fast carrier force alternated with ASW patrol and shore bombardment duties until she sailed for home 13 September.

Henry W Tucker entered the Mare Island Naval Shipyard for installation of the newest radar equipment in September emerging 14 April 1953. Her new duties centered primarily on the detection of enemy attack through extensive radar coverage were to take her on eight more WesPac cruises in the next 10 years. In addition to the lonely patrols along the radar picket line. Henry W. Tucker also patrolled the important Formosa Straits and the Korean coast. When not deployed with the 7th Fleet the radar picket destroyer participated in tactical training exercises and fleet maneuvers out of her San Diego homeport. Streaming her homeward bound pennant at Yokosuka 2 November 1962 Henry W. Tucker sailed for Boston via Pearl Harbor San Diego Acapulco and the Panama Canal. She reached the Naval Shipyard there 13 December to begin fleet rehabilitation and modernization overhaul designed to lengthen her life as an active member of the fleet by 10 to 15 years. While undergoing modernization she was reclassified DD-875 on 15 March 1963. The FRAM overhaul was completed 4 December 1963 and Henry W. Tucker began a program of intensive training until 26 May when she departed for the western Pacific and a station on the Taiwan Patrol. Almost immediately she was diverted to the South China Sea where the 7th Fleet brought swift power to bear in answer to continued communist aggression.

Tucker alternated between antisubmarine patrol off Vietnam and off Taiwan until April 1965 when she joined Operation "Market Time " a close surveillance of Vietnamese coastal traffic to prevent the shipment of supplies to the Viet Cong on the South Vietnamese coast. On 16 May the veteran destroyer pounded Viet Cong coastal concentrations southeast of Saigon and thus became the first U.S. ship to provide naval gunfire support against enemy targets in South Vietnam. During the next 14 months she continued her varied but important assignments against Communist aggression.

She provided gunfire support for ground operations dozens of times; and during a 40 day Period in August and September fired over 5 000 rounds from her 5-inch guns destroying or damaging numerous enemy positions. In addition to "Market Time" patrols she screened hard hitting attack carriers in the South China Sea and the Gulf of Tonkin and served us a search and rescue control ship to recover downed pilots at sea. This vital duty sent her close to enemy-controlled shores; however joined by daring SAR helicopters which refueled and replenished from the destroyer while in flight she provided maximum protection for planes returning from strikes over North Vietnam. She refueled more than 80 helicopters while on SAR assignments. Known as "Tuck's Tavern" to the brave "chopper" pilots she became the first destroyer 6 November to refuel an in-flight helicopter at night. Coordinated training with these versatile aircraft paid off 26 June 1966 when two pilots from Constellation (CVA-64) and Ranger (CVA-61) were plucked from the sea less than 3 miles from the North Vietnamese coast and carried to Henry W. Tucker.

After more than 2 years of almost continuous duty off Vietnam Henry W. Tucker returned to Long Beach early in August. Following a 4-month overhaul and intensive training out of San Diego and Long Beach she deployed to the Far East in June 1967. She resumed carrier screening duty late in July; and following the disastrous fire on board Forrestal 29 July she took part in survivor rescue and escort operations. As the conflict in South Vietnam continued in 1967 Henry W. Tucker a battle-tested veteran of two struggles against Communist aggression in the Far East remained "on the line" ready to meet the challenge of new assignments efficiently effectively and with dispatch.

Henry W. Tucker was awarded seven battle stars for her participation in the Korean conflict.


Add Your Name to the
DD-875 Crew Roster