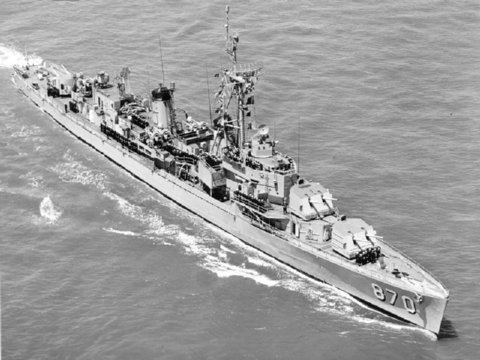 The second Fechteler (DD-870) was launched 19 September 1945 by Bethlehem Steel Co. Staten Island N.Y. sponsored by Miss Joan S. Fechteler sponsor of the first Fechteler; and commissioned 2 March 1946 Commander A. A. Wellings in command. She was reclassified DDR-870 9 April 1953.

Homeported at Norfolk Va. Fechteler operated with carriers in the Virginia Capes area and made a brief winter cruise to Argentia Newfoundland. On 6 January 1947 she sailed from Norfolk for the west coast and on 26 May sailed from San Diego for her first tour of duty in the Far East. Serving in the occupation she called at several Chinese ports as well as at Okinawa Hong Kong Yokosuka and Guam. She returned to San Diego 22 January 1948 to resume west coast training operations.

Fechteler completed a second tour of duty in the Far East in 1949 and in June 1950 when the Korean War broke out was at sea off San Francisco on exercises. At once she sailed for Pearl Harbor where she stood by in preparation for the possible spreading of the conflict and on 14 July returned to San Diego to prepare for Korean service. She served in the Far East on two war-time deployments the first from 13 November 1950 to 8 August 1961 the second from 23 February 1952 to 29 September 1952. During both of these she screened TF 77 in its air operations sailed with the escort and patrol force and gave bombardment and close gunfire support to the troops ashore.

Fechteler was decommissioned and placed in reserve 1 April 1953 for conversion to a radar picket destroyer. Recommissioned 1 December 1953 she sailed 10 May 1954 for duty in the Far East until 6 September when she sailed on westward to join the Atlantic Fleet at Newport arriving 27 October. In addition to participating in the Atlantic schedule of east coast and Caribbean exercises she also joined in a midshipman cruise in the summer of 1955 voyaging to Malaga Spain; Plymouth England; and Guantanamo Bay Cuba.

Once more assigned to the Pacific Fleet Fechteler sailed from Newport 14 May 1956 for Long Beach which she reached 28 June. In 1956 1957-58 1958-59 and 1960 she cruised in the Far East on duty with the 7th Fleet serving both on the Taiwan Patrol and with carrier task forces as a radar warning ship.


Add Your Name to the
DD-870 Crew Roster