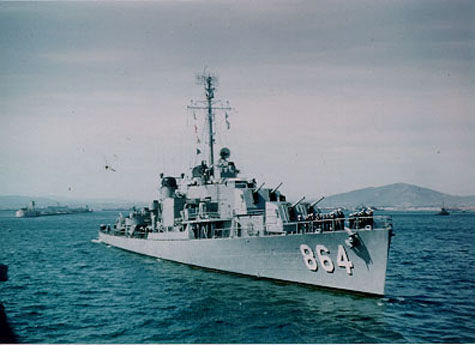 Final Disposition:Sunk as a target 1994

Although scheduled to join the Pacific Fleet for the final assault on Japan Harold J Ellison was completing her shakedown cruise when the surrender came 15 August 1945. Homeported at Norfolk she operated in the Atlantic and Caribbean for the next 2 y ears taking part in Naval Reserve training cruises and antisubmarine exercises.

Beginning in 1947 when she sailed from Norfolk 10 November Harold J. Ellison added periodic cruises to the Mediterranean with the 6th Fleet to her operations helping to keep the peace and protect American interests in this vital area. She participat ed in the search for lost British submarine Affray in April 1961 and added cruises to the Caribbean and northern Europe in 1953

From 1954 to 1956 she continued tactical training along the East Coast and participated in European cruises. Following the explosive Suez crises Harold J. Ellison took part in vital peacekeeping operation during 1957 as the 6th Fleet helped stabilize the dangerous incident in the Eastern Mediterranean.

The following summer another crisis threatened the stability of the Mideast as the government of Lebanon was in danger from communist oriented insurgents. The veteran peace keeping destroyer screened Saratoga and Des Moines from July to September l958 while the 6th Fleet landed Marines at the request of Lebanese President Chamoun. Once again the rapid and effective response of this mighty armada clearly pointed up the value of ready trained propositioned amphibious forces in maintaining world peace.

In September she operated with famed Task Group Alfa for the perfection of new tactics and equipment in antisubmarine warfare. Harold J. Ellison remained on this duty until April 1959.

The ship returned to her pattern of cruises to the Mediterranean in 1959 departing 21 September. In 1960 her homeport became Charleston and in 1961 during her tenth tour with the 6th Fleet the ship cruised in the troubled Persian Gulf during the cr isis in Kuwait. Harold J. Ellison added a new function in January 1962 when she was assigned to Project Mercury as a part of the recovery unit on the Atlantic range. In 1962 she entered New York Naval Shipyard for a Fleet modernization and rehabilitation overhaul an extensive repair job designed to extend her life and improve her readiness. The veteran destroyer rejoined the fleet in early 1963 and through 1964 continued to operate on training and readiness exercises off the Atlantic coast. Her high peac etime accomplishments are exemplified by the winning of five Battle Efficiency "E" awards during her years of service.

On 29 September 1965 Harold J. Ellison departed Norfolk in DesRon 24 and headed via the Panama Canal for the Pacific to augment the Pacific Fleet during the struggle for freedom in Vietnam. During her months in the combat zone she served as a rescue destroyer screened carriers patrolled and fired over 1 000 rounds of fire in ammunition on various Viet Cong targets to support friendly troops.

Leaving Southeast Asia by steaming eastward through the Suez Canal she completed her round the-world cruise upon returning to Norfolk in April 1966. In July she entered the Norfolk Naval Shipyard for an overhaul which lasted for the rest of the year.


Add Your Name to the
DD-864 Crew Roster