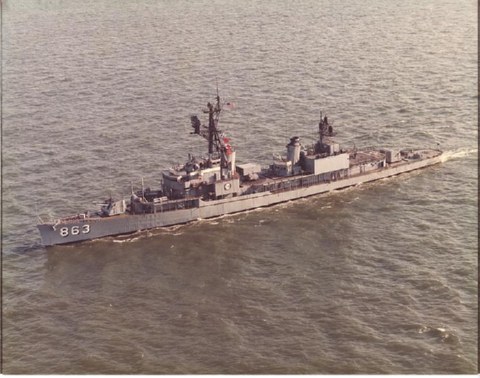 Steinaker (DD-863) was laid down on 1 September 1944 by the Bethlehem Steel Co. Staten Island N.Y.launched on 13 February 1945 sponsored by Miss Carol Steinaker; and commissioned on 26 May 1945 Comdr. S. A. McCornock in command.

Steinaker held her shakedown cruise off Guantanamo Bay Cuba and returned to Norfolk her home port where she acted as a training ship for the remainder of the year. Until 1952 the destroyer alternated her operations between the east coast with the Atlantic Fleet and deployment with the 6th Fleet. She was deployed to the Mediterranean in 1947 1949, 1950, 1951, and the first five months of 1952.

Steinaker entered the Norfolk Naval Shipyard on 1 July 1952 for conversion to a radar picket destroyer and was classified as DDR-863. The work was completed on 28 February 1953 and shakedown at Guantanamo Bay followed. She made her first deployment to the 6th Fleet as a picket destroyer from 16 September to 3 February 1954. She also served with the 6th Fleet for portions of 1955 1958, 1959, 1960, 1962, 1963, and 1965. In 1964 the destroyer was converted under the FRAM program and given modern antisubmarine weapons and detection equipment. On 1 July of that year she resumed the designation DD-863.

Steinaker was in the Red Sea and Indian Ocean for two months in 1967 as a unit of the Middle East Force. On 26 March 1968 she stood out of Norfolk headed for her first tour in the western Pacific. She transited the Panama Canal on 31 March and after calling briefly at San Diego Pearl Harbor Midway Guam and the Philippine Islands arrived off Vietnam.

Steinaker was assigned to the 7th Fleet from 20 May trough 1 October and participated in naval gunfire support operations off Binh Thuan and Phu Yen Provinces "Sea Dragon" operations off the coast of North Vietnam to interdict seaborne infiltration of Communist forces into South Vietnam; and antiaircraft picket duty off the demilitarized zone. She also operated with aircraft carriers conducting strikes against North Vietnam.

Steinaker returned to the east coast of the United States via Subic Bay Singapore Yokosuka and Okinawa. She arrived at Norfolk on 5 November 1968 and resumed Atlantic Fleet operations until 9 January 1970. At that time she was assigned to the North Atlantic Treaty Organization's Standing Naval Force Atlantic. This tour lasted until 23 July 1970. She made another voyage to the Mediterranean from 23 February to 23 July 1971 and returned to the North Atlantic from 10 July to 18 November 1972.

Steinaker was transferred to Destroyer Squadron 10 Naval Reserve Force on 1 July 1973 and changed her home port to Baltimore. Into December 1974 she serves as a training ship for reserves.


Add Your Name to the
DD-863 Crew Roster