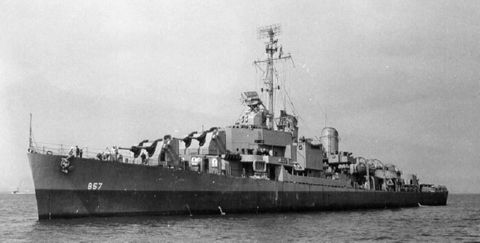 In April 1946 Bristol proceeded to the east coast and reported to the Atlantic Fleet. She operated along the east coast until February 1947 when she steamed to England for a cruise in European waters that lasted until August. Between August 1947 and September 1948 she conducted local operations in the Atlantic and from September 1948 until January 1949 made a second tour of Europe.

Upon return she was designated as a Reserve training ship and operated for the next 18 months out of New Orleans La. During the summer and tall of 1950 Bristol visited several Caribbean ports with interim periods of training at Guantanamo Bay Cuba.

Since that time Bristol has served with the Atlantic Fleet and has carried out her normal peacetime operating schedule along the east coast in the Caribbean and with the 6th Fleet in the Mediterranean.

Bristol received one battle star for her World War II service and two battle stars for her Korean service.


Add Your Name to the
DD-857 Crew Roster