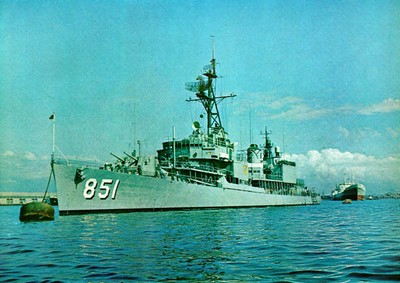 Following shakedown off Guantanamo Bay and visits to various east coast ports Rupertus transited the Panama Canal and steamed to San Francisco. Since 1946 she has alternated deployments to the western Pacific with operations off the west coast of the United States.

On her first deployment in 1947 she operated throughout the Far East but particularly at Tsingtao China. In the eastern Pacific throughout 1948 she returned to Tsingtao in 1949 only to be one of the last three American ships to leave that port before it fell to the Communists.

Returning to San Diego in December for operations in the eastern Pacific and overhaul she departed San Diego 13 November 1950 to operate with U.N. forces off Korea. She escorted carrier Sicily from Sasebo to Hungnam Korea then from 14 May 1951 operated with blockade and escort TF 95 off the west coast of Korea and in the Yellow Sea. Leaving TF 95 and steaming to Wonsan Rupertus spent 10 days off the coast near Songju and fired thousands of rounds of ammunition at shore targets. Rupertus saw continuous combat service until 4 July 1951 when she returned to Inchon during the armistice talks.

Returning to San Diego 8 August 1951 Rupertus steamed out again to rejoin the 7th Fleet 23 February 1952. Operating first with carrier TF 77 she then departed to bombard the Hungnam-Hannum area with Manchester and rescued a pilot from Boxer while under heavy Communist shore battery fire. Rupertus put in to the Long Beach Naval Shipyard for overhaul on 6 October.

After the Korean truce Rupertus continued her annual deployments to WestPac until 1960 when she was assigned Yokosuka as a homeport. In WestPac for almost 3 consecutive years she operated off Vietnam during the Communist advance there in April 1961.

Rupertus returned to San Francisco 13 December 1962 and following a FRAM I overhaul which replaced her World War II armament with a modern integrated ASW weapons system including ASROC and DASH she entered her temporary homeport of Long Beach Calif. On 26 May 1964 she again steamed for Yokosuka Taiwan Patrol and after the August Tonkin Gulf incident the South China Sea. Remaining in the Far East in June 1965 she Participated in operations supporting the Gemini IV space flight then returned to Vietnamese waters for "Market Time" operations boarding and inspecting many boats and ships off South Vietnam in search of Communist contraband; and provided naval gunfire support to U.S. forces in Vietnam. Operations on Taiwan Patrol and in the South China Sea continued throughout 1966 interrupted by participation in GT-9A recovery operations in May and June.

Rupertus again homeported at Long Beach arrived there 3 August 1966. A year later she sailed for the Far East again arriving on Yankee Station in the Gulf of Tonkin in July. With Forrestal (CVA-59) when a series of explosions temporarily disabled the giant carrier on 29 July Rupertus maneuvered to within 20 feet of the crippled ship and remained alongside for a period of 3 hours assisting in fighting fires cooling magazines and rescuing personnel thrown into the sea. Rupertus then participated in "Sea Dragon" operations involving the interdiction of waterborne logistics craft staging from North Vietnamese ports and drew enemy fire off Dong Hoi North Vietnam which resulted in minor shrapnel hits. Assigned to gunfire support off South Vietnam in October she returned to Long Beach on 4 December.

Following overhaul and exercises off the California coast Rupertus again got underway for WestPac on 3 July 1968. She arrived in her new homeport Yokosuka 22 July and assumed naval gunfire support responsibilities off South Vietnam on 14 August. Taking up "Sea Dragon" duties on 29 August she again came under fire from enemy coastal defense sites. After serving as part of the Apollo 7 recovery team she returned to duties off Vietnam and then plane guard duty off Korea winding up 1968 in Yokosuka.

Continuing to operate throughout the Far East during 1969 part of that time off Vietnam Rupertus returned to San Diego 15 August 1970. She remained in San Diego for the rest of 1970 spending much of the time in drydock.

Both 1971 and 1972 brought Rupertus a WestPac cruise each of about six months duration and alternated with operations in the San Diego area. Soon after her return from the second of these latest deployments in the spring of 1973 she underwent an INSURV inspection which resulted in her being declared unfit for further service. Rupertus was offered to the Hellenic Navy on a loan basis and she was decommissioned 10 July 1973. Concurrent with her decommissioning she was transferred to the Hellenic Navy and recommissioned as Kountouriotis (D-213).


Add Your Name to the
DD-851 Crew Roster