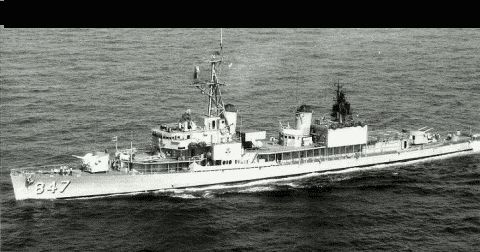 Final Disposition:Sunk as a target 1 March 1980

Following shakedown in Cuban waters Robert L. Wilson sailed from Norfolk 23 July 1946 for a 6-month tour of duty with the 6th Fleet in the Mediterranean. Returning to the United States in February 1947 she spent the next 2 years based at Newport R.I. operating off the Atlantic Coast and in the Caribbean.

After overhaul at Boston she stood out of Hampton Roads on a midshipman cruise to Plymouth England; Cherbourg France; and Guantanamo Bay Cuba. On 4 March 1950 Robert L. Wilson was redesignated an escort destroyer (DDE-847). She finished out the year with a midshipman training cruise to Northern Europe duty in the Mediterranean which included special antisubmarine warfare demonstrations and hunter-killer operations along the eastern seaboard from Norfolk.

On 1 January 1951 as the result of a fleet reorganization Robert L. Wilson became a unit of Escort Squadron 4 and hoisted the pennant of Commander Escort Division 42. By 30 June 1960 she had completed eight tours of service in the Mediterranean since commissioning provided training for cadets of the U.S. Military Academy along the eastern seaboard and conducted the annual summer midshipmen cruises for the U.S. Naval Academy stressing antisubmarine tactics. On 1 July 1956 she was assigned to the newly established Destroyer Squadron 36 composed of destroyer escort types specially configured for antisubmarine missions and yet maintaining the capability to handle all destroyer missions. During the last week of November and the early part of December 1959 Robert L. Wilson and two other escort destroyers participated in Operation "Monsoon " manning sea-air rescue stations for the Presidential flight to Europe from the United States. She then operated in the western Atlantic and Caribbean until a Norfolk Navy Yard overhaul in the summer of 1960.

Returning to Caribbean and Atlantic operations in January 1961 Robert L. Wilson pursued Portuguese liner SS Santa Maria which had been seized by a group of revolutionaries. An 8-day chase took Wilson across the equator to Recife Brazil. Returning to Norfolk Wilson underwent a month of preparation then departed on 8 June for her ninth Mediterranean cruise. She spent the fall and winter of 1961 operating in the western Atlantic out of Norfolk.

In January 1962 Wilson participated in recovery operations for a Project Mercury manned space capsule. Wilson deployed with Task Group Bravo to Northern Europe in February returning to Norfolk in mid-June 1962. On 1 August 1962 she was again classified DD-847. In September of 1962 Wilson and the other ships of Destroyer Division 362 deployed to Guantanamo Bay Cuba as a unit under the command of the Naval Base Commander for the purpose of base defense and was at Guantanamo and in adjacent waters during the Cuban Crisis in October. Wilson returned to Norfolk in late November and operated locally until March 1963 when she entered the Philadelphia Navy Yard for a FRAM I modernization. Emerging from her overhaul period in 1964 she continued to serve with the Atlantic Fleet for the balance of that year and throughout 1965.

After serving as gunfire support ship at Guantanamo Bay Cuba in late January and early February 1966 Robert L Wilson was assigned the abort station for the first unmanned Apollo space shot. In April and June she was rescue destroyer for Wasp (CVS-18) prime recovery ship for the Gemini 9 space mission. Following ASW exercises she made her 12th deployment to the Mediterranean 22 July 1966 returning to Norfolk 17 December. Following service as School ship for the Fleet Sonar School in January and February Wilson spent the rest of 1967 operating in the Atlantic and Caribbean.

Robert L. Wilson continued these operations until May 1968 when she joined the search for nuclear submarine Scorpion searching the continental shelf off the coast of Norfolk and then following the Scorpion's track back to her last reported position southwest of the Azores without success. Returning to Norfolk 13 June Wilson operated in the Atlantic until steaming 6 September for a western Pacific deployment.

Touching at San Diego Pearl Harbor Midway Guam and Subic Bay Robert L. Wilson took up a naval gunfire support mission 36 miles south of Hue the ancient capital of South Vietnam. She then undertook search and rescue duty in the Gulf of Tonkin after 28 October destroying two sampans with .50 caliber machine gun fire and hand grenades. In early November Wilson was assigned as plane guard for Constellation (CVA-64) on Yankee Station. She remained in the Far East through the end of the year.

Wilson returned to San Diego from the Far East 27 March 1969 and operated off the west coast until transiting the Panama Canal and arriving Norfolk 21 June. She then operated in the western Atlantic and Caribbean until deploying to the Mediterranean on 5 March 1970. During this Mediterranean cruise Robert L. Wilson participated in two combined NATO exercises DAWN PATROL and MEDTACEX and was for a time diverted to the Levantine Basine due to another Middle East crisis. She returned to Norfolk 16 September for a leave upkeep and training cycle which continued to the end of the year.

Upon completion of overhaul refresher training and other operations in the Atlantic Robert L. Wilson commenced another deployment to the Sixth Fleet departing from Norfolk 17 September. After six months away from Norfolk she returned 17 March 1972 and completed the year operating out of that port. This employment continued throughout 1973 and 1974 finds Robert L. Wilson in port at her new home port Philadelphia Pa.


Add Your Name to the
DD-847 Crew Roster