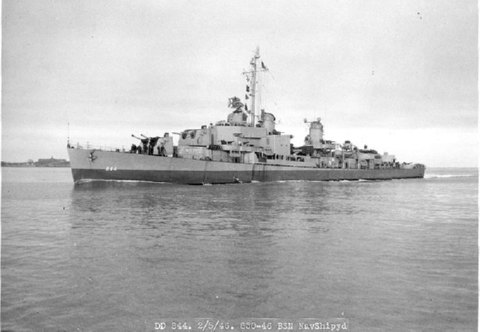 Following shakedown off Cuba and plane guard exercises off Pensacola Perry departed the east coast 12 June 1946 for her first overseas deployment a 9 month cruise which took her first to northern Europe thence to the Mediterranean. There she joined other American units in patrolling off tension ridden areas bordering on that sea particularly on the Adriatic the Aegean and the Dardanelles-Sea of Marmara-Bosporus. Returning to her homeport Newport 8 March 1947 she conducted local operations and exercises from Puerto Rico to Canada and in addition served as Engineering School Ship for Destroyer Forces Atlantic Fleet and in October assisted in fighting the fire which ravaged the Maine resort of Mt. Desert Island.

Perry remained in the western Atlantic until January 1951 when she got underway again for the Mediterranean. 6th Fleet operations were followed by exercises with the British Home Fleet and in May she returned to New England and plane guard duties local operations and training exercises.

In 1952 following her 3rd Mediterranean tour she again served as Engineering School Ship and participated in type fleet and NATO exercises until resuming overseas employment in 1954. In the Mediterranean from January to June she served as Gunnery School Ship on her return.

During the next four years Perry regularly deployed to the Mediterranean patrolling in early 1956 off the Suez Canal as the United States attempted to promote a peaceful settlement to the mounting crisis between Israel and the Arab League nations.

Between 29 April 1959 and 10 May 1960 Perry underwent Fleet Rehabilitation and Modernization (FRAM) Conversion the first such conversion at the Boston Naval Shipyard. In addition to improved living spaces she received the latest in sonar and anti-submarine weaponry including ASROC and DASH. Exercises in the Caribbean followed and in August she shifted her homeport to Mayport Fla. whence she began operations with Task Group Alpha. Over the next 2 years she operated with that group participated in Polaris missile tests in the Atlantic Missile Range and conducted local operations and training cruises. On 2 August 1962 she departed Florida to resume overseas deployments and for the next seven years rotated between 6th Fleet and Middle East Force tours and operations in the western Atlantic the latter including further Polaris tests school ship duties for the Sonar School at Key West and in May 1966 patrol duties with TF 124 off the Dominican Republic.

In 1969 Perry interrupted her previous schedule and on 11 January got underway for duty in the western Pacific. Arriving at Subic Bay P.I. 29 February she joined the 7th Fleet for operations off Viet Nam. On 3 September she returned to Mayport and resumed her duties with the Atlantic Fleet continuing them into 1970.


Add Your Name to the
DD-844 Crew Roster