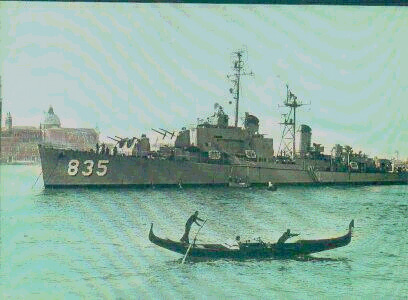 Charles P. Cecil arrived at San Diego her home port 20 November 1945 and almost at once sailed on a tour of Pacific duty which found her operating as part of Joint Task Force One in the atomic bomb tests at Bikini as well as supporting occupation forces with operations in Japanese waters. She returned to San Diego 9 August 1946 and took part in exercises off the west coast until 26 August 1947 when she cleared for her second deployment to the Far East. She touched at many Pacific islands as well as calling at ports in China Japan and Okinawa before her return to San Diego 5 May 1948.

Reclassified DDR-835 18 March 1949 Charles P. Cecil left San Diego astern 4 April 1949 bound for Newport R.I. and assignment to the Atlantic Fleet. First from Newport and from December 1950 from Norfolk Va. Charles P. Cecil operated through 1960 with the Atlantic Fleet taking part in midshipmen training cruises periodic deployments to the Mediterranean and the overhauls and refresher training necessary to maintain her readiness. She participated in a long list of North Atlantic Treaty Organization operations in waters ranging from those north of the Arctic Circle to the Mediterranean. Her tours of duty with 6th Fleet in the Mediterranean included one which coincided with the Suez Crisis of fall 1956 during which she took up watchful patrol in the eastern Mediterranean.

From January 1959 when she was fitted with highly complex electronic computational and tracking equipment Charles P. Cecil concentrated on air defense experiments and exercises contributing to the development of advanced techniques. Her training however continued to include the areas such as antisubmarine warfare and amphibious operations required of the versatile destroyer.


Add Your Name to the
DD-835 Crew Roster