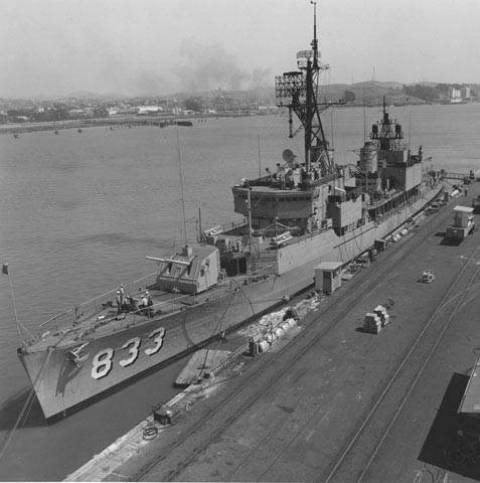 After shakedown along the East Coast and in the Caribbean Herbert J. Thomas transited the Panama Canal and joined the Western Pacific Forces supporting the occupation of Japan and Korea at war's end.

After operations with the 7th Fleet out of Japan during most of 1946 and patrol duty in Korean waters she sailed late November via Guam and Pearl Harbor arriving San Diego 21 December. Herbert J. Thomas sailed 6 January 1947 via the Canal Zone arriving Newport R.I. 6 February. Between February 1947 and 22 May 1950 she conducted operations along the East Coast and in the Caribbean and made three deployments with the 6th Fleet to the Mediterranean. During the latter part of 1948 she was assigned duty as a Naval Academy practice ship giving 6-day antisubmarine indoctrinations.

Herbert J. Thomas had just returned from the Mediterranean and was in Cartagena Colombia when hostilities broke out in Korea in June 1950. She immediately proceeded to Pearl Harbor and joined the Pacific Fleet. In July she joined Task Force 77 (7th Fleet Striking Force) operating off the coast of Korea in the Yellow Sea effectively checking the enemy. A month later Herbert J. Thomas was assigned to the blockading force on Korea's east coast and rendered highly effective gunfire support missions for our forces at Pohang inflicting much damage on the enemy. While operating with the blockading forces she furnished interdiction fire all along the eastern coast and fired a diversionary mission for British commandos who were landed from submarine Perch to destroy a vital railroad tunnel.

At 1329 on the afternoon of 4 September Herbert J. Thomas was on picket duty about 60 miles north of Admiral Ewen's main force when she made radar contact on unidentified aircraft and reported this to Valley Forge planes passing overhead. A division of Corsairs which was orbiting northeast of the force was vectored out. The raid was now estimated on course 160° speed 180 knots. As the fighters turned to meet it it separated into two parts. one retiring in the direction whence it came. Sighting the fighters the bogey nosed down increased speed and began evasive action but turned toward Korea rather than westward toward China. The division leader flew over him in an attempt to identify and reported a twin-engined bomber with red star markings. The intruder opened fire and was subsequently shot down. Herbert J. Thomas proceeded to the spot where the plane splashed and recovered the body of a Russian aviator. Artificial respiration continued for an hour but brought no sign of life.

For the next 3 months she was assigned patrol duty and operations with Task Force 77. Departing 24 January 1951 Herbert J. Thomas arrived San Diego 12 February and spent the remainder of the year operating in that area. Returning to Korea 25 January 1952 she joined Task Force 77 for 1 month and spent 2 weeks on the bombline performing vital gunfire support and screening duties. Late February Herbert J. Thomas took up patrol duty in the Formosa Straits and in April was assigned duty in the Songjin area. In this she coordinated the operations of several ships in the Songjin-Chongjin area.

After a brief period with the 7th Fleet Striking Force she joined the Blockading and Escort Force off the east coast of Korea. On 11 May she dueled with shore batteries in Wonsan Harbor where she received one hit with no casualties and slight damage. Quick to retaliate Herbert J. Thomas dealt severely with the enemy inflicting much damage. The remainder of the month was spent on patrol bombarding and furnishing fire support for minesweeping operations in the Sensan Songjin and Chongjin areas.

Retiring to Yokosuka Herbert J. Thomas sailed 8 June for San Diego arriving the 26th. Assigned the new homeport of Long Beach she operated in that area until departing 2 February 1953 for duty with the Far Eastern Naval Forces. Arriving Yokosuka 27 February Herbert J. Thomas joined the 7th Fleet Striking Force and screened the carriers launching strikes on North Korea. From 4 April to 19 May she was assigned electronics countermeasures duties in addition to call fire missions on gun emplacements and radar stations effectively checking the enemy.

Herbert J. Thomas. departed 5 May 1954 for her fourth tour in the Far East. After operating in the Philippines and out of Yokosuka she proceeded 23 July to Kaoshiung Formosa to take up patrol duty. Returning to Long Beach 5 December she spent the next 51/2 months operating with carrier Kearsarge in that area.

From 14 June 1955 to 1 March 1958 Herbert J. Thomas. made three more deployments to the Far East. During these tours she operated with the fast carrier task forces and had duty on the Taiwan Patrol helping to stabilize the Chinese situation and protect vital American interests.

On 25 October 1958 Herbert J. Thomas deployed again with other units of the 7th Fleet to the Far East serving with pride as a good-will ambassador for the United States. She trained with Japanese destroyers in antisubmarine exercises and operated again with fast carrier groups.

"Thomas" deployed regularly to the Far East until 9 July 1963 when she entered Mare Island Naval Shipyard Vallejo Calif. and remained in commission in reserve for a 121/2-month modernization overhaul which gave her protection against biological chemical and atomic warfare agents. Returning to full commission 31 July Herbert J. Thomas completed her FRAM I conversion 3.0 August and operated along the West Coast until sailing for the Far East 14 September 1966. Arriving Yankee Station off South Vietnam 16 October she joined CTG 77.7 in screening Franklin D. Roosevelt (CVA-42) during strikes against Communist targets ashore. She retired toward the Philippines 16 November arriving Subic Bay 3 days later en route to Kaoshiung Taiwan for patrol duty in the Strait of Formosa 24 November through 16 December Back oil Vietnam 19 December Herbert J. Thomas aided ground forces with naval gunfire support. In the ensuing fortnight her guns killed at least 9 Viet Cong; destroyed 90 buildings 12 bunkers; and damaged 90 buildings 6 bunkers as well as several bridges and sophisticated trench systems. Her mission accomplished she headed for Hong Kong 3 January 1967 to prepare for future action.


Add Your Name to the
DD-833 Crew Roster