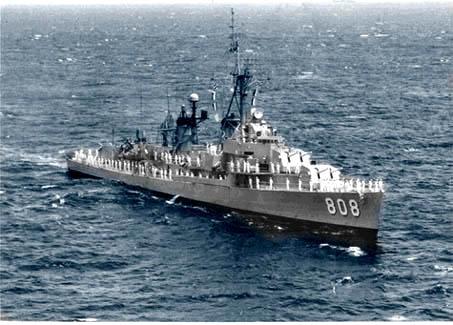 Dennis J. Buckley sailed from Norfolk 7 November 1945 for occupation duty in the Western Pacific arriving at Tokyo Bay 22 December. She operated in the Marianas and visited Manila Philippine Islands before returning to San Diego 13 April 1946. On her second tour of duty in the Far Fast in 1947 she cruised off the coast of China providing services to the Fleet and joined in exercises off Okinawa. On 1 October 1948 she steamed for Tsingtao China where she patrolled during the evacuation of civilians from the threat of the Communist advance into northern China. She joined Tarawa (CV-40) and Hawkins (DD-813) and sailed by way of Hong Kong and Singapore; Colombo Ceylon Bahrein and Jidda Saudi Arabia; and Port Said Egypt to Athens Greece where the three ships joined others for a visit to Istanbul Turkey. She returned to New York 22 February 1949 completing a round-the-world cruise.

Dennis J. Buckley departed New York 1 March 1949 for a brief period of operations on the west coast returning to the Canal Zone 10 May for exercises in Caribbean waters. She then operated along the eastern seaboard from Norfolk to Argentia Newfoundland and sailed from Newport 15 April for a tour of duty in the Mediterranean with the 6th Fleet returning to Newport 6 October for local and Caribbean operations. From April to October 1951 she cruised to northern Europe visiting Plymouth Liverpool and Weymouth England; Bremerhaven Germany; Antwerp Belgium; and Cork and Londonderry Ireland.

Between 1952 and 1955 Dennis J .Buckley completed three tours of duty in the Mediterranean and served as gunnery and engineering school ship for destroyer officers. She participated in air defense exercises in the North Atlantic and the Gulf of Mexico and trained midshipmen and reservists.

Dennis J. Buckley sailed from Boston 1 May 1956 to join the Pacific Fleet. Arriving at Long Beach 28 June she got underway 9 July for a tour of duty in the western Pacific from which she returned to Long Beach 21 October. During her second Far Eastern tour in 1957 she screened Princeton (CV-37) patrolled off Taiwan briefly and served as flagship for Commander Destroyer Flotillas western Pacific during October when she was visited by the Chief of Naval Operations Admiral A. A. Burke. Local operations engaged Dennis J. Buckley until 23 August 1958 when she again sailed for the Far East where she joined TF 72 to resupply Nationalist Chinese holding the Quemoy Islands against the threat of Communist seizure.

Returning to Long Beach 27 February 1959 she sailed again for duty in the western Pacific 15 October. She returned to Long Beach 11 March 1960 for operations until May underwent a 3-month overhaul and then resumed west coast duty for the remainder of the year.


Add Your Name to the
DD-808 Crew Roster