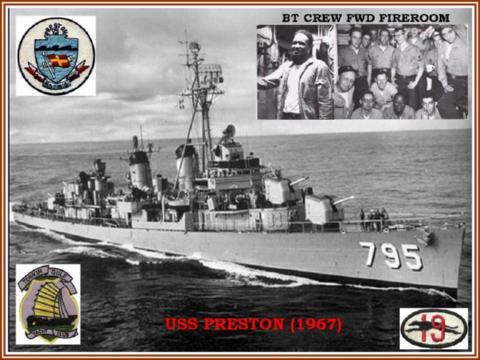 Following shakedown off California and extended exercises in Hawaiian waters Preston departed Pearl Harbor for the Marianas combat zone 1 July 1944. On the 17th she arrived off Guam and until 8 August screened the transport areas off the assault beaches. Two days in Apra harbor followed after which she got underway for Eniwetok. On 29 August she joined TF 38 and sailed west. Between 6 and 8 September she screened the carriers during strikes against the Palaus; then continuing on guarded them during sorties against Japanese positions in the south and central Philippines. On completing runs on the 14th she returned with the force to the Palaus to cover the landings on Peleliu and Anguar then sailed back to the Philippines before retiring to Ulithi.

On 6 October the force again sortied—this time to launch strikes preparatory to the invasion of the Philippines. After hitting the enemy's Formosan air bases the force turned southeast for operations off Luzon in support of the Leyte landings. On the 24th as the Japanese initiated a triple-pronged thrust to drive the Allied forces from Leyte Gulf Preston's group TG 38.3 came under severe attack in what was to be the first of the battles for Leyte Gulf. Wave after wave of bomber and torpedo planes closed the formation. Many were shot down but Princeton was lost. That evening TG 38.3 was ordered north to rendezvous with TG 38.2 and TG 38.4 and search for a Japanese carrier force. Within an hour of the midnight rendezvous search planes were flying. After daylight they caught the enemy force north of Cape Engano and the fighting squadrons were sent off. In the afternoon the force's cruiser—destroyer group closed the surviving ships to deliver final blows. The force then retired to the south to join in the search for enemy vessels fleeing through San Bernardino Strait. On the 27th sorties were flown to provide air cover for ground forces on Leyte after which the ships got underway for Ulithi.

By 5 November Preston was back in the operating area off Luzon as strikes were flown against enemy installations there. Anti-Japanese shipping runs in the central Philippines particularly the Ormoc Bay area followed and on the 12th the hammering of Luzon was resumed and repeated again on 25 November to 2 December and 10 to 21 December. On 30 December the force again steamed northwest from Ulithi and after welcoming the new year 1945 with raids on Formosa and the Nansei Shoto supported the Lingayen assault. Then passing through the Bashi Channel the ships entered the South China Sea and blasted Japanese shipping and shore installations along the Indo-China coast. By 15 January they were off western Formosa and by the 19th had swung around to launch strikes against that island and Okinawa Gunto from the east. During February Preston screened the carriers as their planes delivered devastating blows to industrial complexes on the Japanese home islands; provided air support for the assault troops on Iwo Jima returned to Japan for further strikes on Tokyo Nagoya Osaka and Kobe; and then sailed south for renewed raids against the next amphibious target Okinawa.

Preston reassigned to TF 54 after returning to Ulithi in early March sailed for the Ryukyus 21 March to screen the bombardment and underwater demolition groups. Between 24 March and 1 April she operated off Kerama Retto then shifted to fire support off the Hagushi beaches. Continuing fire support duty until June she provided assistance for Army and Marine Corps personnel on the Motobu Peninsula where her fire enabled Marines to break out of their Japanese ringed position; in the Nago Wan Nakagusuku Wan and Naha areas and on Ie Shima and Kutaka Shima. In early June she conducted patrols against suicide boats then returned to fire support activities. In July she patrolled off northern Okinawa on radar picket duty and in August escorted convoys in and out of the Buckner Bay area.

After the Japanese surrender 14 August Preston remained in the Okinawa area on air sea rescue duty. On 6 September she got underway for the United States arriving at San Pedro on the 24th to begin inactivation. In November she shifted to San Diego where she decommissioned 24 April 1946 and was berthed as a unit of the Pacific Reserve Fleet.

Reactivated following the outbreak of hostilities in Korea Preston recommissioned 26 January 1961 and in April got underway for the east coast. Modernization at Philadelphia preceded a brief stay at her homeport of Newport and on 9 January 1952 she sailed eastward on her Mediterranean deployment. Returning from 6th Fleet duty in May she participated in fleet and type training from Labrador to the Caribbean.

On 1 April 1953 she departed the New England coast for the Pacific and a return to combat in the Far East. Arriving in Japan in early May she operated with the fast carrier force TF 77 until June then joined the UN Blockade and Escort Force TF 95. With the signing of the truce 27 July Preston got underway for Newport and steaming via Suez completed the round-the-world cruise at Boston in October. Overhaul followed and between May and September 1954 she operated with HUK units of the Atlantic Fleet. In 1955 another Mediterranean deployment was followed by ASW exercises and on 15 March 1956 she cleared Narragansett Bay and headed back to the west coast.

Assigned to DesRon 23 Preston arrived at Long Beach 15 April and through May operated off the California coast. In June she sailed west for her first peacetime Far East deployment and initiated a schedule of regular rotation between tours with the 7th Fleet in the western Pacific and 1st Fleet assignments; the former including SEATO and other Allied exercises and Taiwan patrol duty and the latter including west coast training and cruises to the Arctic and to the central Pacific. In December 1958 Preston assisted the fire ravaged Japanese town of Keniya by providing food and clothing. During 1962 she followed winter arctic operations with participation in nuclear tests in the milder climes of the Pacific. And in 1965 she deployed for the first time to the Viet Namese combat area. Joining TG 77.5 on 12 August she performed plane guard and screening duties for the carriers Coral Sea and Ticonderoga and provided gunfire support to ground troops until 15 January 1966.

She was struck from the Naval Vessel Register 15 November 1969.

Preston earned 6 battle stars during World War II and 1 during the Korean Conflict.


Add Your Name to the
DD-795 Crew Roster