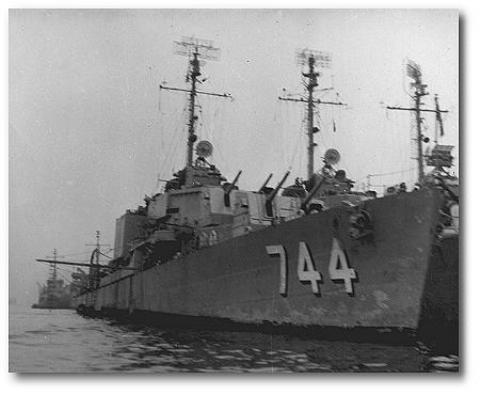 BLUE reported to the Pacific Fleet in July 1944 and joined TF 58 at Eniwetok Atoll Marshall Islands. While screening the fast carrier task forces BLUE took part in the Volcanos-Bonin-Yap raid-(31 August-9 September); capture of the southern Palaus (6 September-14 October); Philippine Islands raids (9-24 September); Luzon raids (5-6 13-14 and 18 November and 14-16 December); Formosa raids (3-4 9 and 15 January 1945); Luzon raids (6-7 January); China coast raids (12-16 January); Honshu and the Nansei Shoto raids (15-26 February and 1 March); Iwo Jima assault (15 February-4 March); and conquest of Okinawa (17 March-6 June). BLUE was damaged by the 5 June typhoon off Okinawa and retired to Leyte for repairs. Her repairs were completed in time for the destroyer to join the 3rd Fleet for its attacks against the Japanese home islands (10 July-15 August).

On 27 August BLUE captured the 5223-ton submarine I-400 off the coast of Honshu and brought her into port. She steamed into Tokyo Bay 2 September and remained at anchor at Yokosuka Naval Base for two weeks. She then steamed to San Francisco arriving 5 October 1945 and shortly thereafter sailed to Puget Sound Navy Yard for complete overhaul.

BLUE completed her overhaul in January 1946 and was assigned to Destroyer Division 92 7th Fleet. On 10 February she departed the west coast for Asiatic waters via Pearl Harbor Guam and the Philippines and arrived on the China coast 13 May. During the remainder of the year she cruised in the Yellow Sea Philippine waters and around the Marianas Islands engaged in tactical and hunter-killer anti-submarine warfare exercises and performed patrol duty. She returned to the United States early in 1947 and on 14 February was place out of commission in reserve at San Diego.

On 14 May 1949 BLUE was recommissioned and assigned to Destroyer Division 72 Pacific Fleet. After undergoing overhaul at San Francisco Naval Shipyard between June and September she returned to Pacific Reserve Fleet and was decommissioned at San Diego 12 December 1949.

BLUE was again placed in commission 15 September 1950 and reported to Destroyer Division 131 Pacific Fleet. After engaging in training exercises off the coast of California she departed San Diego early in 1951 and arrived at Yokosuka Japan 23 January. She operated in Korean and Japanese waters until August. During this period she steamed with TF 77 off the east coast of Korea carrying out screening life guard and fire support duties. Late in 1951 BLUE proceeded to the United States for a general overhaul at San Francisco Naval Shipyard. She returned to the combat area in April 1952 and resumed operations with TF 77 off the coast of Korea. During September-October with TG 95.20 and TF 76 she performed patrol duty and provided gunfire support during salvage operations.

Returning to the United States in November 1952 she underwent overhaul and engaged in scheduled exercises off the coast of California until June 1953. On 13 June she departed Long Beach Calif. and arrived at Yokosuka 7 July. On the 17th she resumed screening operations with TF 77 off the east coast of Japan with TG 96.7 and patrolled off Formosa until 19 October when she returned to Korea. She returned to the west coast in December 1953.

Since that time BLUE has carried out the normal operating routine of the Pacific Fleet destroyers. She had conducted several tours of the Far East and during the intervals between these cruises has conducted local operations and type training along the west coast.


Add Your Name to the
DD-744 Crew Roster