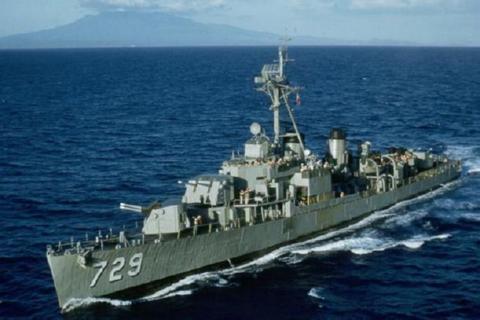 Commissioned after the battle for the Atlantic had been decided Lyman K. Swenson completed a Bermuda-based shakedown cruise 25 June 1944 and prepared for duty in the Pacific. Departing Boston 31 July the new destroyer transited the Panama Canal 8 August and arrived at Pearl Harbor the 33th. After intensive training and practice in ASW and AAW she departed for the war zone 28 September dropping anchor at Ulithi her base for the next 6 months on 13 October.

Lyman K. Swenson left Ulithi 21 October as part of DesRon 61 screening a replenishment group of 10 oilers. This group remained off the Philippines refueling Admiral Halsey's carrier forces while the Japanese Navy suffered its crippling defeat at the Battle for Leyte Gulf 24 to 26 October. The destroyer then joined TG 38.4 for carrier support duties. On 30 October while supporting operations on Leyte she saw her first hostile action. Carriers Franklin and Belleau Wood received hits and the group retired to Ulithi for replenishment and repairs.

During much of November and December Lyman K. Swenson screened various carrier groups engaged in the process of softening up the island of Luzon. Mid-December witnessed the rescue of four pilots and three enlisted men while on plane guard duty and the horrors of a typhoon which generated waves 50 and 60 feet high. Though three destroyers capsized Lyman K. Swenson emerged safely and returned to Ulithi

The new year dawned as she steamed with TG 38.1 on a 3 800 mile raid which spewed destruction on Formosa Luzon and on Japanese shipping along the Vietnamese and Chinese coasts. Okinawa also received attention from the carriers planes before the return to Ulithi 26 January 1845 For the next 4 months aircraft and repair centers on Okinawa and the Japanese home island of Kyushu were the main targets for the strike group temporarily redesignated TG 58.1.

During the Okinawa campaign the Japanese again attacked with much of their remaining airpower. With air targets plentiful Lyman K. Swenson splashed her first plane a Francis on 18 March and destroyed her second on the 27th. This campaign also provided an opportunity for shore bombardment as she shelled Okino Daita Shima early in March and Minami Daito Jima in April and again in June. With her sister ships she then returned to San Pedro Bay Leyte to prepare for a mission which would continue until the surrender of Japan 71 days later.

Five carriers three battleships six cruisers and their destroyer screen steamed forth 1 July to practice screen reorientation and conduct antiaircraft practice before proceeding northward to carry the war to the heart of the Japanese home islands. Air opposition remained minimal and after DesRon 61's antishipping sweep into Sagami Van Honshu on the night of 22/23 July enemy ships also proved difficult to locate. Lyman K. Swenson remained in enemy waters until after Japan's formal surrender on board battleship Missouri 2 September.

On 20 September came the welcome order to depart Tokyo Bay; and after picking up additional passengers in Okinawa Lyman K. Swenson proceeded back to the United States. She reached Seattle 15 October and then settled down in dry dock at San Francisco on the 29th.

Lyman K. Swenson returned to the Far East as part of the 7th Fleet from 2 March 1946 to 4 February 1947. After performing patrol duties along the Chinese Korean and Japanese coasts she steamed home to San Diego via Kwajalein arriving 22 February. For the next 2 years she trained both her own crew and Naval reservists off the west coast.

In March 1950 she again turned westward. A member of DesRon 91 she worked with the carrier Boxer out of Okinawa until the outbreak of the Korean conflict brought immediate assignment to Korean waters. Reacting with the characteristic speed of seaborne power her group launched the first carrier based strike against North Korea 3 July. Besides plane guard and parole duties she also participated in shore bombardment and fire support missions along the eastern coast.

Missions near Yongdok 22 to 26 July and against Chongjin in the far northeast corner of Korea 20 August were among the more successful ones. Yet the high point of this first tour was the amphibious landing at Inchon. Lyman K. Swenson and five sister DD's entered Inchon Bay 2 days before the landings to silence shore batteries. During this bombardment the ship suffered two casualties from a near miss. The next day Lt. ( jg.) David H. Swenson nephew of the officer for whom the ship was named was buried at sea. On D-Day 15 September she returned eagerly to cover the landing and punish the enemy. For their gallantry all six ships received the Navy Unit Commendation and the Korean Presidential Unit Citation.

On 23 October Lyman K. Swenson retired to Sasebo Japan and then on to the United States arriving San Diego 18 November. After 7 months at home she again departed for Korea 18 June 1951. On this 8-month tour and the succeeding one which began 15 September 1952 her main duties remained much the same as they had been during 1950 She took special pride in her ability to disrupt railroad and highway transportation and twice earned the praise of Vice Adm. H. M. Martin.

In the aftermath of the Korean Armistice July 1953 Lyman K. Swenson continued to average one 6-month deployment annually in the western Pacific until 1960. To catch up with changing technology she entered the Mare Island Naval Shipyard 27 June 1960 for a FRAM II refit. Antisubmarine warfare capabilities received the greatest emphasis as she received a helicopter flight and hanger deck. Following underway training and exercises she departed 6 January 1962 with DesDiv 92 for a prolonged stay in the Far East. Yokosuka Japan served as her new home port. Periods of patrol duty preceded and followed SEATO operation "Tulungan" the largest peacetime amphibious landing operation ever conducted in the western Pacific. During the next 2 years. the ship ranged widely over the Far East. After particularly extensive 7th Fleet exercise "Crazy Horse " she paid a 3 day good will visit to Bangkok Thailand and a 4 day visit to Saigon.

With orders to proceed to the troubled coast of the Republic of Vietnam Lyman K. Swenson departed San Diego 24 August 1966 and commenced fire support operations 4 October. In her first 2 weeks of action she expended as much ammunition as 2 months of comparable duty during the Korean conflict in 1950. Screen and plane guard duties for carriers Independence and Ticonderoga normally followed such Periods of fire support.

Lyman K. Swenson continued on station until departing for home in January 1966. She arrived in San Diego 26 February and participated in the annual midshipmen training cruise in June. For the remainder of 1968 Lyman K. Swenson n operated out of her home port of San Diego on various ASW and gunnery exercises. From 20 January to 1 March 1967 she underwent predeployment repairs in Long Beach Naval Shipyard.

8 April saw the ship once again underway for the western Pacific. After a stop in Yokosuka Japan she operated in the northern Tonkin Gulf as a search and rescue unit from May through August She escorted the carrier Constellation into September then sailed once again for home Arriving home 6 October 1967 after another successful deployment the veteran destroyer served as an engineering school ship and was assigned availability to the Development and training command into 1968. She remained in the eastern Pacific through most of 1968 deploying to WestPac again late in the year to serve there into 1969.


Add Your Name to the
DD-729 Crew Roster