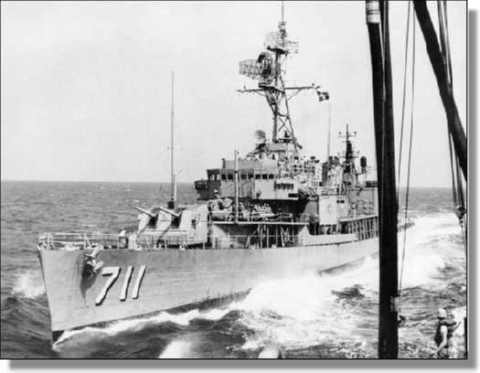 Eugene A. Greene operated along the east coast and in the Caribbean on shakedown training acting as plane guard during the qualification of pilots in carrier operations and training men for the crews of new destroyers. From her home port in Norfolk she sailed to Guantanamo Bay for training early in 1947 and on 13 February sailed in a task group bound for Montevideo Uruguay to participate in the festivities accompanying the inauguration of Uruguay's president. The group also paid a good will visit to Rio de Janeiro before returning to Norfolk 31 March.

On 10 November 1947 Eugene A. Greene sailed on the first of 9 Mediterranean cruises made over the next 13 years. During those years she and her sisters of the U.S. 6th Fleet have guarded the interests of peace and order in that sea which was the cradle of democratic government. Voyages to northern Europe and the Arctic varied the routine of overseas deployment for Eugene A. Greene.

Except for the period 1 April 1962 to 1 December 1952 when she was out of commission being converted to a radar picket destroyer Eugene A. Greene like nearly all other destroyers has had little time for relaxation. When not on distant duty she has sailed east coast and Caribbean waters constantly schooling reservists serving as plane guard in carrier operations exercising with large task groups and standing watch against any air or seaborne threat to the security of the free world.


Add Your Name to the
DD-711 Crew Roster