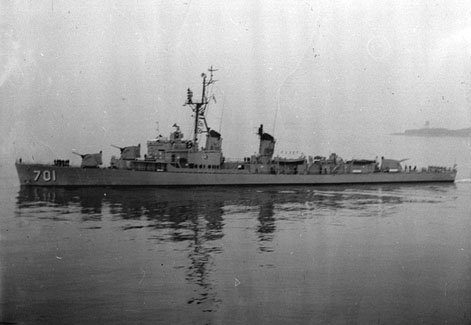 Early in January 1945 John W. Weeks sortied from that busy lagoon with Vice Admiral John S. McCain Fast Carrier Task Force TF 38 and headed toward the Philippines in the screen of Rear Admiral Gerald F. Bogan's task group. Meanwhile the mighty Luzon Attack Force assembled in Leyte Gulf on New Year's Day passed through Surigao Strait and set course for Lingayen Gulf. On the 9th as General MacArthur's troops stormed ashore on the beaches at Lingayen planes from McCain's carriers hit Japanese airstrips on Formosa and the Pescadores to neutralize air opposition to the Luzon invasion. That night McCain's ships slipped through Luzon Strait into the South China Sea where they could be on call to support the Allied beachheads while striking strategic enemy positions along the southeastern coast of Asia and searching for the Imperial Fleet. In the next 10 days they lashed out at Hong Kong Hainan and the Indochinese coast causing much damage ashore and sinking 44 ships totaling 132 700 tons. At the end of this sweep into enemy waters Admiral Halsey reported "the outer defenses of the Japanese Empire no longer include Burma and the Netherlands East Indies those countries are now isolated outposts and their products are no longer available to the Japanese war machine . . ." John W. Weeks proud of her role in this daring incursion into the South China Sea returned with her carriers to Ulithi on the 28th.

The destroyer again sailed with the carriers 11 February and conducted strikes on Tokyo 16 and 17 February in preinvasion support of the Allied attack on Iwo Jima. After inflicting considerable damage to Japanese air power John W. Weeks steamed toward Iwo Jima to give direct support to marines fighting for the island. Later that month the carriers renewed their attacks on the enemy's home islands. Heavy raids during March continued to cripple the enemy's power and the destroyer received credit for two assists as five enemy planes were splashed while attempting a raid on the Task Force.

When D-day for the Okinawa invasion neared John W. Weeks in company with other units shelled the shore in preinvasion bombardment. The assault forces landed in 1 April and the destroyer stood by to offer support. On 7 April a Japanese surface force was located. and strikes were launched to intercept the enemy resulting in the sinking of the battleship Yamato. During these operations the carrier Hancock (CV-19) was hit by a kamikaze the destroyer rescued 23 survivors in a heroic rescue mission.

For the remainder of the war John W. Weeks participated Fated in the final assault on the Empire Islands engaging in radar picket duty shore bombardment rescue mission and the antishipping sweep off Tokyo Bay. Following the cessation of hostilities she steamed into Tokyo Bay 8 September to begin escort operations with the occupation forces. She continued escort duty until 30 December Shell she sailed for home arriving San Francisco 20 January 1946. The destroyer arrived Norfolk 19 February and following repairs she was inactivated 26 April.

One year later 17 May 1947 she sailed once again aid commenced Naval Reserve training cruises until mid 1949. On 6 September of that year she sailed for Europe returning 8 February 1950 John W. Weeks decommissioned 31 May 1950.

When the North Korean Communist invaded South Korea President Truman ordered American forces into action to take up the challenge. John W. Weeks recommissioned 24 October 1950 and commenced training cruises in the Atlantic and Caribbean. During her European Cruise January 1952 she participated in the attempt to save ill-fated Flying Enterprise which foundered and sank in a 90-mile gale 10 January 1952. The destroyers returned to Norfolk 6 February to engage in coastal operations and a midshipmen European cruise.

John W. Weeks sailed on an around the world cruise November 1953 and while in the Far East she operated with units of the 7th Fleet off the coast of Korea. She completed the cruise when she returned via the Mediterranean arriving Norfolk 4 June 1954. From 1954 to 1963 the destroyer operated with the Atlantic Fleet and during; this period made five Mediterranean cruises and two NAT0 exercises.

John W. Weeks was operating with the 6th Fleet during 1956 when a crisis erupted in the Mid East over the Suez Canal. The destroyer remained on patrol a concrete symbol of American interest in a peaceful outcome. One year later on another Near Eastern deployment. John W. Weeks and other units stood by to prevent subversion of Jordan. The Mediterranean cruise of 1958 included patrol duty and exercises with navies of Bagdad-Pact countries The destroyer was also active in U.S. waters busy with midshipmen at-sea training and antisubmarine exercise. During 1959 she participated in Operation "Inland Seas during the opening of the St. Lawrence Seaway. John W. Weeks was the first Navy destroyer to enter each of the Great Lakes. During this cruise she escorted HMY Britannia with the Queen of England aboard from Chicago to Sault Ste. Marie Mich.

On 9 March 1960 the destroyer in company with Ault (DD- 698) transited the Bosporus and the two became the first U.S. warships to enter the Black Sea since 1945 On the same cruise she rendezvoused with Triton at the end of the nuclear powered submarine's cruise round the world.

After returning to Norfolk the destroyer visited the Caribbean and the New England Coast on midshipman training at sea. In the fall she deployed to the Mediterranean and returned to Norfolk 3 March 1962. Midshipman training in the summer and exercise out of Norfolk; kept the ship in fighting trim and ready for action.

In October the presence of Soviet offensive missiles in Cuba prompted President Kennedy to order a quarantine of the island. John W. Weeks escorted replenishment ships to the quarantine area. When this display of national strength and determination forced the Kremlin to withdraw the missiles John Weeks returned via San Juan P.R. to Norfolk.

Early in 1963 while preparing for another Mediterranean deployment from February to April the destroyer received the Battle Efficiency "E" for outstanding service. She headed for the Mediterranean 29 November. The end of the year found her patrolling off troubled Cyprus standing by ready to evacuate if necessary Americans from that strife-torn island. On New Year's Day en route to the Red Sea to join that U.S. Middle East Force she was the first ship to transit the Suez Canal during 1964. She visited Jidda Saudi Arabia; Berbera Somali Republic Aden Aden Protectorate; Djibouti French Somaliland; Massawa Ethiopia; and Karachi Pakistan. She headed west from Karachi 6 February refueled at Aden; then turned south for patrol along the Zanzibar coast during the revolution there and off Kenya and Tanganyika during unrest in those countries. She departed Mombasa Kenya 24 February and transited the Suez Canal 6 March After patrolling the Mediterranean John W.Weeks departed Pollenca Bay Majorca for home 12 May and reached Norfolk on the 23d.

After Overhaul in Norfolk Naval Shipyard the destroyer departed Hampton Roads 9 November for Guantanamo Bay and refresher training. She returned to Norfolk early in January 1965 to prepare for another Mediterranean cruise. She got underway 18 February and arrived Valencia Spain 5 March. She stopped at Naples for a fortnight en route to the Suez Canal and 2 months of duty in the Red Sea. Back in the Mediterranean 2 June the destroyer headed for home 30 June and returned to Norfolk 12 July.

Late in the summer the destroyer was on the Gemini 5 recovery team. For the remainder of the year she operated out of Norfolk in the Caribbean and along the Atlantic Coast. She continued ASW exercises in the Caribbean until returning to Norfolk 3 February 1966. After serving as sonar school ship at Key West during March and April the veteran destroyer departed Norfolk 16 May for European waters.

Steaming with DesRon 2 John W. Weeks during the next 3 months cruised the western coast of Europe from Norway to France. She took part in ASW exercises and during Operation "Straight Laced " a simulated invasion of the Norwegian coast she operated with British and West German ships. While carrying out ASW duty during this exercise she made the only simulated submarine kill in the operation 19 August. Departing Londonderry Northern Ireland 24 August she returned to Norfolk 2 September. During the remainder of the year she served as school ship at Key West and joined in ASW exercises along the Atlantic Coast and in the Caribbean.

John W. Weeks continued this duty until early in July 1967 when she departed Norfolk for deployment in the South Atlantic and Indian Oceans. Steaming via San Juan Puerto Rico and Recife Brazil she touched at African ports on the east and west coasts of that continent and ranged Africa from the Gulf of Guinea to the Red Sea while cruising in the interest of peace and freedom.


Add Your Name to the
DD-701 Crew Roster