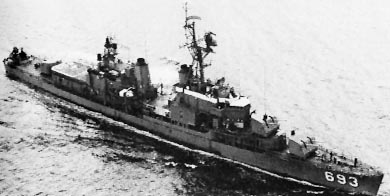 Following a Bermuda shakedown Moale remained on the Atlantic coast conducting experimental tests and training precommissioning destroyer crews. On 21 August she got underway with DesDiv 120 for the British West Indies whence she continued to the Panama Canal Zone and thence into the Pacific.. Reporting to ComDesPac at Pearl Harbor 15 September she underwent carrier screening night firing and shore bombardment exercises until 23 October. She then departed for the Western Carolines as a unit of DesRon 60. Arriving at Ulithi 5 November she Joined TF 38 the fast carrier force and got underway the same day to screen the carriers as their planes conducted strikes against Japanese targets on Luzon and Mindoro. Returning to Ulithi 22 November she was underway again on the 27 to report for duty with the 7th Fleet.

Joining TG-77.2 29 November in San Pedro Bay she patrolled Leyte Gulf and participated in strikes against enemy forces in Ormoc Bay. On 12 December she shifted to TG 77.3 and took up a screening position with the Mindoro assault force. On the 15th she provided fire support for the troops and antiaircraft protection for the ships in the transport area.

Moale departed for Leyte 17 December. Arriving on the 18th she completed a high speed cargo run to Ulithi and back by the end of the year. On 3 January 1945 she was once again en route to an assault area. Steaming with TG 77.2 she arrived off Luzon on the 6th and commenced screening the heavy ships to seaward as they bombarded San Fernando and other enemy concentrations in the proposed beachhead area. On the 9th she took up gunfire support duties alternating such duties with antisubmarine and antiaircraft operations. The destroyer operated with the Luzon covering group until the 22d. She then returned to Leyte whence she steamed back to Ulithi to resume operations with the test carrier forces now designated TF 58.

On 10 February the force sortied from Ulithi and on the 16th and 17th strikes were conducted against the enemy's capital to prevent aid from being sent to the Japanese defenders on Iwo Jima. Two ships of DesRon 60 Barton and Ingraham were damaged when they collided on the 16th and on the 17th Moale was detached to escort them back to Saipan. While enroute DD-693 assisted in the sinking of an enemy armed merchantman and a small coastal vessel. Ordered back on the 18th she rendezvoused with TG 58.4 on the 19th and on the 21st screened the carriers as they provided air cover for the marines on Iwo Jima.

Having sustained extensive damage to her deck and No. 1 mount during heavy seas with 40 - foot swells Moale departed the Volcanos 25 February and sailed eastward for repairs at Pearl Harbor. On 3 June she returned to Ulithi getting underway for the combat area the next day. Arriving at Hagushi Anchorage Okinawa 7 June she reported to CTG 31.5 and immediately became part of the antiaircraft defenses of the area. Through the 27th she served on radar picket stations where danger remained present and alerts still frequent even though the pressure was not as great as in April and May. On the 28th Moale departed for Leyte where she Joined TG 32.12 and returned to Okinawa to act as part of the covering force for minesweepers in operation "Juneau."

At the end of the month DD -693 93 once again anchored in San Pedro Bay Leyte. There on 15 August she received word of the Japanese surrender. On the 20th she sailed to rendezvous with TG 38.4 off the coast of Japan and for the next month she steamed off that coast serving as a weather ship and air route radio beacon. On 27 September she departed Tokyo Bay proceeding via Guam to the west coast and peacetime duty.

Moale remained in operation off the west coast until 21 May 1948 when she sailed for to Join TF 1 for operation "Crossroads" returning to the west coast for overhaul at Bremerton 22 August. Overhaul completed in January 1947 she conducted operations along the California coast until March. She then deployed to the western Pacific for 6 months prior to reporting to the Fleet Sonar School at San Diego for duty as a training ship.

In the spring of 1949 Moale with DesDiv 72 was transferred to the Atlantic Fleet. Arriving at Norfolk at the end of April she participated in training exercises in the western Atlantic until November 1950 when she sailed eastward for her first 6th Fleet deployment. Similar operational schedules alternate east coast and Mediterranean duties were followed until 24 April 1953 when Moale departed on an around-the-world voyage. During that cruise which ended at Norfolk 27 October the destroyer spent 4 months with the U.N. forces off the coast of Korea. During June and July she operated with TF 77 and TF 95 remaining after the truce as a unit of the security patrol.

From 1954 into 1969 Moale's employment schedule has included operations in the Atlantic North Sea and the Caribbean with regular rotation to the Mediterranean for duty with the 6th Fleet. Highlights of her career during this period were patrol duty in the Eastern Mediterranean during the Israeli- Egyptian war of 1956; duty as a recovery ship for the Project Mercury mission of astronaut M. Scott Carpenter May 1962; participation in the Cuban Quarantine October-November 1962; and standby duty for the evacuation of American nationals from Cyprus in 1964.


Add Your Name to the
DD-693 Crew Roster