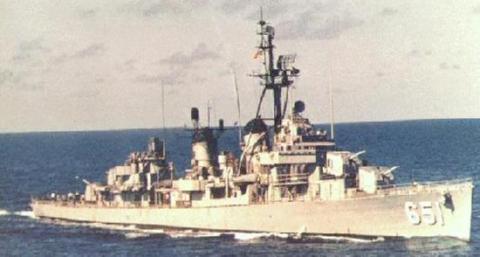 Cogswell arrived at Pearl Harbor 9 December 1943 for training and there joined the screen of mighty carrier Task Force 58 for the Marshall Islands operation. At sea on this duty from 16 January 1944 until 12 February when she put in to Majuro Cogswell also bombarded Gugewe Island. She continued her screening as the carriers launched raids on Truk on 16 and 17 February and on bases in the Marianas on 21 and 22 February then sailed from Majuro to Espiritu Santo to screen carriers providing air cover for the seizure of Emirau Island from 20 to 25 March and raiding the Palaus Yap and Woleai from 30 March to 1 April.

The destroyer returned to Majuro 6 April 1944 and a week later joined the sortie for the Hollandia landings of 21 to 24 April and air raids on Truk Satawan and Ponape at the close of the month. Replenishment at Majuro from 4 May to 6 June preceded Cogswell's assignment to screen carriers during the landings in the Marianas. On 16 June Cogswell was temporarily detached to join in the bombardment of Guam rejoining her force to guard it during the momentous air Battle of the Philippine Sea on 19 and 20 June. She continued her screening in the raids on Palau Ulithi Yap Iwo Jima and Chichi Jima from 25 July to 5 August during the last of which she joined in the surface gunfire which sank several ships of a Japanese convoy earlier badly mauled by carrier aircraft. From 11 to 30 August she replenished at Eniwetok.

Next at sea from 30 August to 27 September 1944 Cogswell sailed in the carrier screen as strikes were hurled at targets in the Palaus and Philippines during the invasion of Peleliu. On 6 October she sailed from Ulithi for the air strikes on Okinawa and Formosa in preparation for the Leyte landings and fired protective antiaircraft cover for her force during the Formosa air battle of 12 to 14 October. After guarding the retirement toward safety of the stricken Canberra (CA- 70) and Houston (CL-81) she rejoined her force for air strikes on Luzon and the Visayans and screened them during the Battle of Surigao Strait one phase of the decisive Battle for Leyte Gulf. She returned to Ulithi 30 October but put to sea 2 days later to return to the Philippines. After Reno (CL-96) was damaged by a submarine's torpedo Cogswell guarded her passage to the safety of Ulithi then returned to screen air strikes on Luzon the landings on Mindoro and the air attacks on Formosa and the China coast which neutralized Japanese bases in preparation for and during the Lingayen invasion. Cogswell screened Ticonderoga (CV-14) hit during an air attack into Ulithi 24 January 1945 and sailed on to the west coast for overhaul. After sailing across the Pacific guarding convoys Cogswell arrived off Okinawa 27 May 1945 for dangerous and demanding duty as radar picket until 26 June. Three days later she rejoined the carrier Task Force 38 for the final series of raids against the Japanese home islands until the close of the war. Arriving in Sagami Wan 27 August Cogswell pushed on into Tokyo Bay 2 September for the surrender ceremonies. She supported the occupation in the Far East through operations in Japanese waters and escort duty to Korean ports until 5 December when she sailed from Yokosuka for San Diego Boston and Charleston where she was decommissioned and placed in reserve 30 April 1946.

Recommissioned 7 January 1951 Cogswell served with the Atlantic Fleet with Newport R.I. as her home port. Between 26 August 1952 and February 1953 she cruised to ports of northern Europe while taking part in NATO operations sailing on for duty with the 6th Fleet in the Mediterranean. She again cleared Newport 10 August 1953 bound for the Panama Canal and duty off Korea and patrolling in the Taiwan Straits. Continuing westward she sailed through the Suez Canal and completed her cruise around the world 10 March 1954.

On 15 December 1954 Cogswell arrived in San Diego to join the Pacific Fleet. From that time through 1963 she has alternated tours of duty with the 7th Fleet in the Far East with coastwise operations. On her 1955 cruise she took part in the evacuation of the Tachen Islands. She returned to the Far East in 1956 and each succeeding year through 1960. In 1957 Cogswell visited Australia and the Fiji Islands and in 1958 she took part in nuclear weapons tests at Johnston Island and patrolled in the Taiwan Straits when Chinese Communists resumed shelling of the offshore islands and threatened their assault.


Add Your Name to the
DD-651 Crew Roster