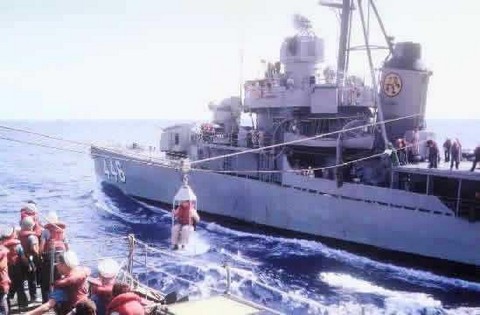 After shakedown off the New England coast Radford towed the burning transport Wakefield (AP-21) to Halifax where the fires were extinguished. Antisubmarine patrol off the east coast followed and on 5 December Radford got underway for the Pacific.

At Noumea Radford joined TG 67.5 with which she bombarded Japanese positions and installations on Guadalcanal 19 January 1943. On the night of 23-24 January she attacked the enemy staging area on Kolombangara and within the next week had splashed three enemy planes. Radford then retired to Tulagi whence she sailed to cover the occupation of the Russell Islands by U.S. troops. Radford shelled Munda Airfield and installations on New Georgia Island on the night of 5-6 March 1943 and on the nights of 15 and 16 March bombarded Kolombangara.

On 29 June Radford steamed with the First Echelon of the Western Force for Rendova to provide shore bombardment and antisubmarine patrol to cover the landing of troops.

During this action she shot down five planes. On 1 July she damaged a Japanese submarine with gunfire and depth charges. She was involved in the night surface engagement off Kula Gulf 5-6 July firing on three enemy ships and picking up survivors of Helena. During the night of 12-13 July Radford acted as a screening unit for TG 36.1 while that force conducted an offensive sweep against the "Tokyo Express."

On 17 July she left the Solomons for the New Hebrides Auckland New Zealand and Noumea New Caledonia. Returning to Guadalcanal 14 September she sank a number of enemy barges and on 25 November sent the Japanese submarine I-40 to the bottom off Makin. After the Gilbert Islands operations Radford steamed for Pearl Harbor and San Francisco where she arrived 15 December for overhaul.

By 2 February 1944 Radford was back at Majuro Atoll. On the 18th she screened tankers as they fueled the Truk Island striking force then escorted the replenishment force to the New Hebrides. In March she returned to the Solomons and shelled gun emplacements on Bougainville.

Proceeding to New Guinea in April Radford bombarded the beach at Humboldt Bay in support of landings there on the 22d. She steamed back to the Solomons stopped at Noumea and returned to the New Guinea area in early June. Into September she continued support of the New Guinea campaign with escort runs and gunfire support missions.

On 12 September Radford sailed for Pearl Harbor for repairs. On 20 November she steamed for Eniwetok and Ulithi. On 4 December she got underway escorting a group of merchant vessels to Leyte Gulf. She operated there and off Mindoro until steaming for Lingayen Gulf 4 January 1945. After supporting the landings on Luzon she delivered fire support on the beaches of the Bataan Peninsula. While maneuvering into Mariveles Harbor to take the mine-damaged La Vallette in tow Radford was herself damaged by a mine.

Sailing for Leyte Gulf 20 February she continued on to Eniwetok Atoll Pearl Harbor and San Francisco. She remained there undergoing repairs until 30 September 1945. Radford decommissioned 17 January 1946.

After conversion to an escort destroyer (DDE-446) 26 March 1949 especially equipped for antisubmarine warfare Radford recommissioned at San Francisco 17 October 1949. Following shakedown off the California coast she sailed to her homeport of Pearl Harbor. In May 1950 she escorted Valley Forge (CVA-45) to Subic Bay and Hong Kong. With the outbreak of the Korean Conflict she was dispatched to Korea where she operated until returning to Pearl Harbor 9 November.

Occupied with overhaul and type training at Pearl Harbor for the next year Radford then sailed 19 November 1951 for operations with Task Force 77 a fast carrier striking group off Korea. Other operations found her with British units off the west coast of the embattled peninsula and steaming close inshore for bombardment and to support minesweeping operations. She also rescued survivors from the grounded S.S. Eastorr off the coast of Japan before returning to Pearl Harbor 21 June 1952.

Radford cleared Pearl Harbor 4 September 1952 for operations on patrol and in exercises in the western Pacific based at Eniwetok. She returned to Pearl Harbor 25 November for type training until 3 May 1953 when she headed for the Far East. Once more Radford operated with TF 77 bombarding the east coast of Korea. From 12 to 22 July in company with Manchester (CL-83) she steamed off Wonsan Harbor firing on targets in the vicinity of Mode Pamlo and later entered the harbor itself. Following duty on the southern patrol in the Taiwan Strait she returned to Pearl Harbor 30 November.

During the next 16 years Radford alternated operations in the Hawaiian area with deployments to the Far East. During this period she made 11 WestPac cruises serving on the Taiwan Patrol in 1954 1955 and 1956 and operating in Japanese waters in 1957 1958 and 1959. On 25 March 1960 she entered the U.S. Naval Shipyard at Pearl Harbor to begin her 7-month long FRAM (Fleet Rehabilitation and. Modernization) II overhaul which gave her a helicopter hanger and flight deck. During 1961 she operated continuously in the Hawaiian area picking up the nose cone of Discoverer XXV on 19 June and rescuing 5 fishermen from the sea 16 November.

On 5 February 1962 Radford sailed for the western Pacific as a unit of Antisubmarine Warfare Task Group 70.4 composed of Bennington (CVS-20) and the eight destroyers of Destroyer Divisions 252 and 92 She participated in joint SEATO operations was called to the South China Sea to help meet the Laotian crisis in May and in June was called to the Taiwan Straits due to heavy Communist buildups in the area. She returned to Pearl Harbor 18 July and became DD-446 again 7 August 1962. On 3 October Radford was stationed a few hundred miles east of Midway Island in the 4th orbit recovery area for Project Mercury's Sigma 7 flight.

In a 1963 overhaul Variable Depth Sonar and DASH equipment was installed. Radford steamed to WestPac again in 1963 1965 and 1966. During 1967 1968 and 1969 she operated on Yankee Station and bombarded Viet Cong targets in South Vietnam. Radford decommissioned at San Francisco and was struck from the Navy list 10 November 1969 to be sold for scrap.


Add Your Name to the
DD-446 Crew Roster