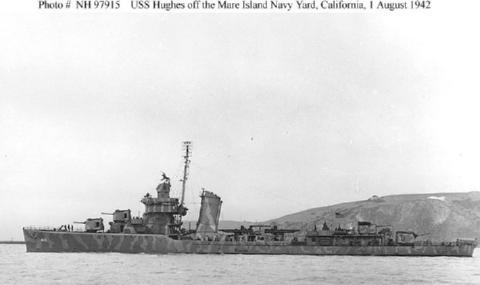 USS Hughes was built at Bath, Maine and was a 1570-ton Sims class destroyer. Hughes was commissioned in September 1939. She was stationed in the Atlantic initially, and was used for training operations and Neutrality Patrols until late 1941 when she was put to work on convoy escort duties. After the attack on Pearl Harbor, USS Hughes was sent to the Pacific where she served with Yorktown through the beginning of 1942.

In August of that year, Hughes began working with Hornet and Enterprise, sent to aid in WWII efforts in the Pacific. In October, she took part in the Battle of the Santa Cruz Islands and then went on to help with the Naval Battle of Guadalcanal in November of 1942. In early 1943, USS Hughes left the Pacific and was sent to the Aleutian Islands where she took part in Kiska Island bombardments in July of that year.

USS Hughes was sent to serve with escort carriers in early 1944, helping with the Marshall Islands and New Guinea assaults until October when she helped in the Leyte campaign. She was damaged in December 1944, repaired and sent back to work until July 1946. A month later, she was decommissioned and then sunk in October of 1948 as a target.


Add Your Name to the
DD-410 Crew Roster