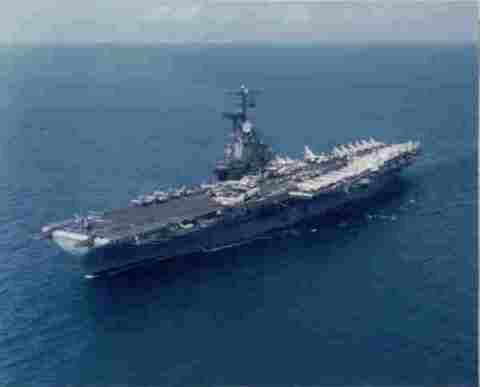 USS Shangri-La was built at the Norfolk Navy Yard, Virginia. The ship was formally commissioned in September 1944. She went to the Pacific Theater in early 1945. Her crew carried out raids against Japanese forces from Okinawa to Japan itself. The ship remained in the Pacific after the Japanese surrender until October of 1945. She was active through the next two years, but was decommissioned in November 1947.

With the Cold War heating up, she came back into service in May 1951 with the Atlantic Fleet. In late 1952, the ship received a new hull number (CVA-38) and was put to dry dock for a modernization program. In January 1955, she was recommissioned. She spent the next five years with the Pacific Fleet, making voyages through the Far East.

In March 1960, Shangri-La was transferred to the Atlantic Fleet. Throughout the next nine years, she deployed to the Mediterranean with other voyages closer to the US as well. June 1969 saw her reclassified as CVS-38. This was in anticipation of a new deployment with anti-submarine aircraft. Her last voyage was to Vietnam to support the war efforts there. In December 1970, she returned to the US for the last time. She was formally decommissioned in July 1971.

Shangri-La an aircraft carrier was laid down by the Norfolk Navy Yard at Portsmouth Va. on 15 January 1943 launched on 24 February 1944 sponsored by Mrs. James H. Doolittle and commissioned on 15 September 1944 Capt. James D. Barner in command.

Shangri-La completed fitting out at Norfolk and took her shakedown cruise to Trinidad B.W.I. between 15 September and 21 December 1944 at which time she returned to Norfolk. On 17 January 1945 she stood out of Hampton Roads formed up with Guam (CB-2) and Harry E. Hubbard (DD-748) and sailed for Panama. The three ships arrived at Cristobal C.Z. on the 23d and transited the canal on the 24th. Shangri-La departed from Balboa C.Z. on 25 January and arriv ed at San Diego Calif. on 4 February. There she loaded passengers stores and extra planes for transit to Hawaii and got underway on 7 February. Upon her arrival at Pearl Harbor on 15 February she commenced two months of duty qualifying land-based Navy pilots in carrier landings.

On 10 April she weighed anchor for Ulithi Atoll where she arrived ten days later. After an overnight stay in the lagoon Shangri-La departed Ulithi in company with Haggard (DD-555) and Stembel (DD-644) to report for duty with Vice Admiral Marc A. Mitscher's Fast Carrier Task Force. On 24 April she joined Task Group 58.4 while it was conducting a fueling rendezvous with TG 50.8. The next day Shangri-La and her air group CVG-85 launched their first strike against the Jap anese. The target was Okino Daito Jima a group of islands several hundred miles to the southeast of Okinawa. Her planes successfully destroyed radar and radio installations there and upon their recovery the task group sailed for Okinawa. Shangri- La supplied combat air patrols for the task group and close air support for the 10th Army on Okinawa before returning to Ulithi on 14 May.

While at Ulithi Shangri-La became the flagship of the 2d Carrier Task Force. Vice Admiral John S McCain hoisted his flag in Shangri-La on 18 May. Six days later TG 58.4 with Shangri-La in company sortied from the lagoon. On 28 May TG 58.4 became TG 38.4 and Vice Admiral McCain relieved Vice Admiral Mitscher as Commander Task Force 38 retaining Shangri-La as his flagship. On 2 and 3 June the task force launched air strikes on the Japanese home islands--aimed particu larly at Kyushu the southernmost of the major islands. Facing the stiffest airborne resistance to date Shangri-La's airmen suffered their heaviest casualties.

On 4 and 5 June she moved off to the northwest to avoid a typhoon; then on the 6th her planes returned to close air support duty over Okinawa. On the 8th her air group hit Kyushu again and on the following day they came back to Okinawa. On the 1 0th the task force cleared Okinawa for Leyte conducting drills en route. Shangri-La entered Leyte Gulf and anchored in San Pedro Bay on 13 June. She remained at anchor there for the rest of June engaged in upkeep and recreation.

On 1 July Shangri-La got underway from Leyte to return to the combat zone. On the 2d the oath of office of Assistant Secretary of the Navy for Air was administered to John L. Sullivan on board Shangri-La the first ceremony of its type e ver undertaken in a combat zone. Eight days later her air group commenced a series of air strikes against Japan which lasted until the capitulation on 15 August.

Shangri-La's planes ranged the length of the island chain during these raids. On the 10th they attacked Tokyo the first raid there since the strikes of the previous February. On 14 and 15 July they pounded Honshu and Hokkaido and on the 18th returned to Tokyo also bombing battleship Nagato moored close to shore at Yokosuka. From 20 to 22 July Shangri-La joined the logistics group for fuel replacement aircraft and mail. By the 24th her pilots were attacking shipping in the vicinity of Kure. They returned the next day for a repeat performance before departing for a two-day replenishment period on the 26th and 27th. On the following day Shangri-La's aircraft damaged cruiser Oyoda and battleship Harun a the latter so badly that she beached and flooded. She later had to be abandoned. They pummeled Tokyo again on 30 July then cleared the area to replenish on 31 July and 1 August.

Shangri-La spent the next four days in the retirement area waiting for a typhoon to pass. On 9 August after heavy fog had caused the cancellation of the previous day's missions the carrier sent her planes aloft to bomb Honshu and Hokkaido once again. The next day they raided Tokyo and central Honshu then retired from the area for logistics. She evaded another typhoon on 11 and 12 August then hit Tokyo again on the 13th. After replenishing on the 14th she sent planes to strike the airfiel ds around Tokyo on the morning of 15 August 1945. Soon thereafter Japan's capitulation was announced; and the fleet was ordered to cease hostilities. Shangri-La steamed around in the strike area from 15 to 23 August patrolling the Honshu area o n the latter d ate. Between 23 August and 16 September her planes sortied on missions of mercy air-dropping supplies to Allied prisoners of war in Japan.

Shangri-La entered Tokyo Bay on 16 September almost two weeks after the surrender ceremony on board Missouri (BB-63) and remained there until 1 October. Departing Japan she arrived at Okinawa on 4 October stayed until the 6th and then headed for the United States in company with Task Unit 38.1.1. She sailed into San Pedro Bay Calif. on 21 October and stayed at Long Beach for three weeks. On 5 November she shifted to San Diego departing that port a month later for Bremerton Wash. She entered Puget Sound on 9 December underwent availability until the 30th and then returned to San Diego.

Upon her return Shangri-La began normal operations out of San Diego primarily engaged in pilot carrier landing qualifications. In May 1946 she sailed for the Central Pacific to participate in Operation "Crossroads " the atomic bomb tests condu cted at Bikini Atoll. Following this she made a brief training cruise to Pearl Harbor then wintered at Puget Sound Naval Shipyard. In March 1947 she deployed again calling at Pearl Harbor and Sydney Australia. When she returned to the United State s Shangri-La was decommissioned and placed in the Reserve Fleet at San Francisco on 7 November 1947.

Shangri-La recommissioned on 10 May 1951 Capt. Francis L. Busey in command. For the next year she conducted training and readiness operations out of Boston Mass. Reclassified an attack aircraft carrier CVA-38 in 1952 she returned to Puget Sound that fall and decommissioned again on 14 November this time for modernization at Puget Sound Naval Shipyard. During the next two years she received an angled flight deck twin steam catapults and her aircraft elevators and arresting gear were ov erhauled. At a cost of approximately $7 million she was virtually a new ship when she commissioned for the third time on 10 January 1955 Capt. Roscoe L. Newman commanding. She conducted intensive fleet training for the remainder of 1955 then deployed to the Far East on 5 January 1956. Until 1960 she alternated western Pacific cruises with operations out of San Diego. On 16 March 1960 she put to sea from San Diego en route to her new home port Mayport Fla. She entered Mayport after visits to Ca llao Peru; Valparaiso Chile; Port of Spain Trinidad; Bayonne N.J.; and Norfolk Va.

After six weeks of underway training in the local operating area around Guantanamo Bay Cuba she embarked upon her first Atlantic deployment a NATO exercise followed by liberty in Southampton England. Almost immediately after her return to Mayport I>Shangri-La was ordered back to sea--this time to the Caribbean in response to trouble in Guatemala and Nicaragua. She returned to Mayport on 25 November 1960 and remained in port for more than two months.

Between 1961 and 1970 Shangri-La alternated between deployments to the Mediterranean and operations in the western Atlantic out of Mayport. She sailed east for her first tour of duty with the 6th Fleet on 2 February 1961. She returned to the U nited States that fall and entered the New York Naval Shipyard. Back in Mayport by the beginning of 1962 Shangri-La stood out again for the Mediterranean on 7 February. After about six months of cruising with the 6th Fleet she departed the Medi terranean in m id-August and arrived in Mayport on the 28th.

Following a month's stay at her home port the aircraft carrier headed for New York and a major overhaul. Shangri-La was modified extensively during her stay in the yard. Four of her 5-inch mounts were removed but she received a new air search and height finding radar and a new arrester system. In addition much of her electrical and engineering equipment was renovated. After sea trials and visits to Bayonne N.J. and Norfolk Va. Shangri-La returned to Mayport for a week in late Mar ch 1963; then put to sea for operations in the Caribbean. Eight months of similar duty followed before Shangri-La weighed anchor for another deployment. On 1 October 1963 she headed back to the 6th Fleet for a seven-month tour.

Shangri-La continued her 2d and 6th Fleet assignments for the next six years. During the winter of 1964 and the spring of 1965 she underwent another extensive overhaul this time at Philadelphia then resumed operations as before. On 30 June 19 69 she was redesignated an antisubmarine warfare aircraft carrier CVS-38. In 1970 Shangri-La returned to the western Pacific after an absence of ten years. She got underway from Mayport on 5 March stopped at Rio de Janeiro Brazil from the 13 th to the 16th and headed east through the Atlantic and Indian oceans. She arrived in Subic Bay R.P. on 4 April and during the next seven months launched combat sorties from Yankee station. Her tours of duty on Yankee station were punctuated by fr equent logistic s trips to Subic Bay by visits to Manila R.P. and Hong Kong B.C.C. in October and by 12 days in drydock at Yokosuka Japan in July.

On 9 November Shangri-La stood out of Subic Bay to return home. En route to Mayport she visited Sydney Australia; Wellington N.Z.; and Rio de Janeiro Brazil. She arrived in Mayport on 16 December and began preparations for inactivation. Af ter pre inactivation overhaul at the Boston Naval Shipyard South Annex Shangri-La decommissioned on 30 July 1971. She was placed in the Atlantic Reserve Fleet and berthed at Philadelphia where she remains as of July 1974.


Add Your Name to the
CV-38 Crew Roster