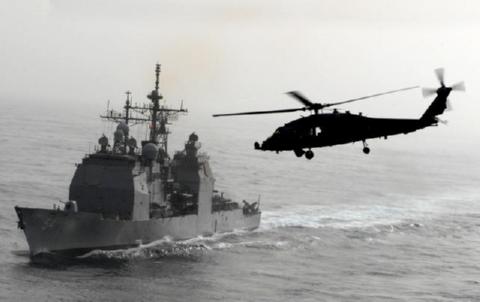 The USS ANTIETAM (CG-54), a Ticonderoga class guided missile cruiser, was commissioned on 6 JUN 1987. USS ANTIETAM serves her country from her homeport of San Diego, California.


The third Antietam (CG-54) was laid down on 15 November 1984 at Pascagoula, Miss., by the Ingalls Shipbuilding Corp.; launched on 15 February 1986; sponsored by the Honorable Beverly B. Byron, Representative from Maryland's 6th Congressional District, who christened the guided-missile cruiser on 19 April 1986; and commissioned on 22 May 1987, Capt. Philip J. Coady, Jr., in command.

The warship spent the remainder of 1987 fitting out and conducting her shakedown training. In January of 1988, she entered Todd Pacific Shipyards Corp. for post-shakedown repairs and alterations. Antietam completed the availability early in March and began operations along the coast of California during which she carried out two research projects for the Office of the Chief of Naval Operations in addition to the normal routine of refresher training, systems' tests, and readiness certifications. That summer, the warship participated in the multinational exercise, RIMPAC '88, the second phase of which took her to the Hawaiian operating area.

On 2 September, Antietam embarked upon her first overseas deployment, an assignment that first took her to the Far East and then, late in October, across the Indian Ocean to the troubled Middle East. After a tour of duty patrolling the Strait of Hormuz, the guided-missile cruiser headed back across the Indian Ocean late in December, and the last day of 1988 found her in port at Singapore.


Add Your Name to the
CG-54 Crew Roster