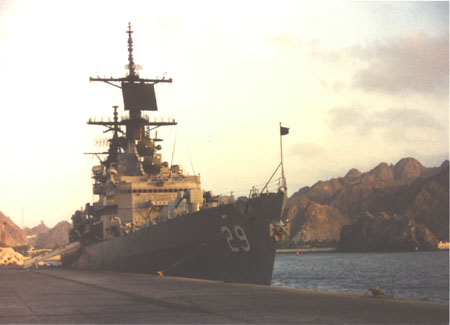 The USS JOUETT (CG-29), a Belknap-class guided missile cruiser, was commissioned on 3 DEC 1966. Built at Puget Sound Naval Shipyard in Bremerton, WA, USS JOUETT, after final fit out and shakedown training took up her duty with the Pacific Fleet, homeported in San Diego, CA. USS JOUETT deployed to the Western Pacific regularly, at first with a destination of Vietnam, later the "West Pacs" extended into the Indian Ocean. USS JOUETT served her country for 27 years, 1 month and 25 days, until decommissioned on 28 JAN 1994. The hulk of the USS JOUETT was disposed of in a Fleet Sinkex east of the Philippines on 10 AUG 2007.

Carrying the most modern antisubmarine detection and missile warfare gear, Jouett joins the fleet as a ready defender of freedom. Her motto, "Eternal Vigilance," serves as a reminder of the ship's mission in war and peace.

Upon completion of fitting out in February of 1967 Jouett was assigned to Cruiser-Destroyer Force, U.S. Pacific Fleet, and operated out of her home port, San Diego.


Add Your Name to the
CG-29 Crew Roster