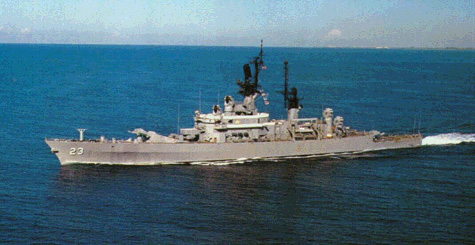 Halsey departed San Francisco on 25 November 1963 for Dabob Bay and Carr Island to conduct ASW system alignment tests and acoustical noise surveys until 7 December. She arrived at her home port of San Diego on 11 December 1963.

Halsey was assigned to Destroyer Squadron 7, Destroyer Division 71 on 13 December, and participated in a special sea power demonstration for the Secretary of the Navy, acting as screen commander from 15-18 December. She conducted her weapons qualification trials from 15 January 1964 to 14 February, and fired her first missiles on the Pacific Missile Range on 10 February 1964.

After a shakedown cruise from 16 March to 1 May, she returned to the San Francisco Naval Shipyard on 15 May 1964; and concluded her post-shakedown on 17 July 1964.

During her first years of active service, Halsey experimented with a unique system of internal organization combining all the aspects of the weapons systems and CIC under a combat officer; and separate hull and communications administration departments.

In 1966 Halsey was assigned to Destroyer Squadron 7, Destroyer Division 71, in the Pacific Fleet. On 2 July she left San Diego for Subic Bay, Philippines. By August she was conducting air-sea rescue and ASW operations in the South China Sea. During this period Halsey rescued some 16 airmen in two cruises in the Gulf of Tonkin. On 5 December the frigate departed Yokasuka, Japan, for the West Coast, arriving San Diego 21 December.

The first quarter of 1967 was spent in training cruises off the West Coast. On ]0 April Halsey left San Diego for an overhaul period at San Francisco Bay Naval Shipyard that continued into August. By September Halsey was again involved in further exercises testing her vital capabilities.


Add Your Name to the
CG-23 Crew Roster