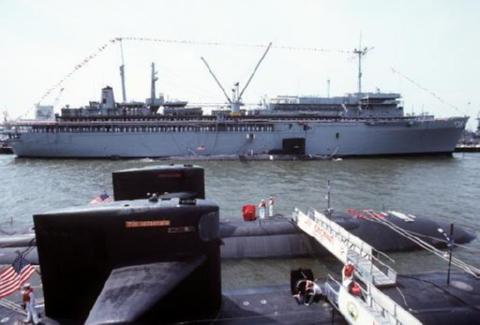 The USS L.Y. SPEAR (AS-36), a L. Y. Spear Class Submarine Tender, was commissioned on 22 FEB 1970. She reported to her homeport of Norfolk, VA after commission and "turned to" tending nuclear attack submarines. Primarily serving stateside, L.Y. SPEAR deployed twice to the Indian Ocean, first as the Iranian Hostage Crisis was unfolding , then during Desert Shield. USS L.Y. SPEAR served her country for 26 years, 6 months and 15 days, until decommissioned on 6 SEP 1996. She is slated to be scrapped.

The USS L.Y. SPEAR (AS-36) deployment history and significant events of her service career follow:

The first of a new class of ships designed primarily to service nuclear attack submarines, L. Y. Spear, once completed, will be assigned to Submarine Squadron 6 with Norfolk as her home base. She will have the capability to provide logistic and technical support for as many as 12 submarines and service four of them alongside simultaneously.


Add Your Name to the
AS-36 Crew Roster