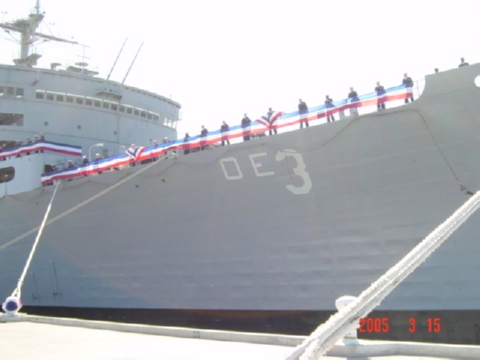 The USS SEATTLE (AOE-3), a Sacramento-class fast combat support ship, was commissioned on 5 APR 1969. USS SEATTLE was built at Puget Sound Naval Shipyard, Bremerton, WA and after fit out and shake down voyaged through the Panama Canal to her duty station at Norfolk, VA. January 1970 brought REFTRA in Guantanamo Bay, Cuba and later that year she began her deigned task, refueling and replenishment of the deployed fleet. SEATTLE's first "Med" was followed by a career of deployment, maintenance and training. In the later part of her service life her routine Mediterranean cruise was extended in to the Indian Ocean to support the standing US Navy presence in the Persian Gulf. USS SEATTLE served her country for 35 years, 11 months and 10 days, until decommissioned on 15 MAR 2005. The hulk of the SEATTLE was scrapped in 2006-2007 by ESCO of Brownsville, Texas.


The second Seattle, a fast combat support ship, was laid down on 1 October 1965 at the Puget Sound Naval Shipyard, Bremerton, Wash.; launched on 2 March 1968; sponsored by Mrs. William M. Allen, Chairman of the Board of the Children's Orthopedic Hospital Association, Seattle; and commissioned on 5 April 1969, Capt. Bruce Keener III in command.

Seattle left home port on 2 January 1970 for Guantanamo Bay and shakedown training. On 13 January, Seattle took attack carrier, America (CVA-66), alongside for refueling. She departed again on the 19th for more exercises and a visit to Port-au-Prince, Haiti, before returning to Guantanamo on 26 January.

On 26 February, Seattle was struck by a yard tug, puncturing a tank, and spilling black oil for almost two hours. The oil was quickly skimmed off the water, and no adverse reaction resulted from the mishap.

Seattle departed Norfolk on 27 August for her first overseas deployment. She entered her first European port, Lisbon, Portugal, on 6 September. On 8 September, she anchored off Rota, Spain. Passing through the Straits of Gibraltar the next day, Seattle loaded cargo onto Concord (AFS-5) and then proceeded to the eastern Mediterranean via Augusta, Sicily. The Jordanian Crisis had brought matters close to a boil, and Seattle served as the primary logistic support ship for Saratoga (CVA-60) and her escorts. Toward the end of the month, Seattle was one of 12 ships reviewed by President Nixon.

Seattle continued her support of Saratoga in the eastern Mediterranean until 20 October, when she arrived in Athens, Greece.

Leaving Athens on 29 October, Seattle replenished ships until 9 November, when she pulled into Augusta, Sicily, for another one-day fuel lift. She then proceeded to Taranto, the Italian Navy's largest base, arriving on the 12th.

Seattle departed Taranto on 16 November and continued replenishment of 6th Fleet ships. She spent from 25 November to 1 December in Naples. From 8 to 14 December, the replenisher was anchored in Barcelona, Spain; and ended the year at Villefranche, France.

Seattle got underway on 6 January 1971 for operations in the vicinity of southeast Sicily. On 17 January, she anchored in Naples, remaining there until the 22d. She operated in the Ionian Sea, the Algiers-Provencal Basin, and off Barcelona until 20 February, when she got underway for operations en route to Norfolk, arriving on 1 March.

On 10 August, Seattle departed for Puerto Rico, arriving at Roosevelt Roads on 13 August. She operated around Puerto Rico, the Virgin Islands, Guantanamo, and Haiti before returning to Norfolk on 11 October.

On 1 December, Seattle steamed out of Craney Island, Virginia, for a six-month deployment to the Mediterranean. The fast combat support ship arrived at Rota, Spain, on the 9th, and got underway on the following day for Augusta, Sicily, arriving on the 16th. On the 19th, she was en route to Naples, where she spent Christmas in port. On 28 December, Seattle ended her stay in Naples and was underway to Barcelona, arriving on New Year's Eve. At the completion of a seven-month Mediterranean cruise, Seattle returned to Norfolk on 29 June 1972. She operated out of Norfolk for four months, then departed, on 24 October, for an unscheduled deployment to the 6th Fleet. She participated in "Bystander" operations in the western Mediterranean and in exercise "National Week XIV" before returning to Norfolk on 19 December.

Seattle spent the remainder of 1972 at Norfolk and the first six months of 1973 in operations from that port.


Add Your Name to the
AOE-3 Crew Roster