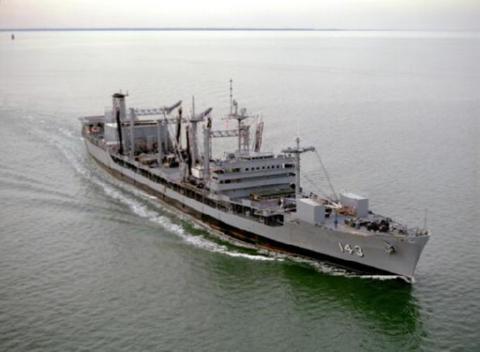 Neosho, first of a class designed to combine speed and large cargo capacity for underway replenishment, reported at Norfolk for duty in the Atlantic Fleet 8 December 1954. A unit of SERVLANT, she operated along the East Coast and in the Caribbean until 7 September 1955, when she got underway for her first Mediterranean deployment. Since that initial deployment, Neosho has rotated regularly between the 6th and 2nd Fleets. By 1967 she had taken part in over 2,500 replenishments to transfer more than 640 million gallons of petroleum products under both normal and crisis operational conditions. In the fall of 1956, during her second 6th Fleet deployment, she supported units of that fleet as they stood by in case they were called on to intervene in the Suez War and the tense period which followed. In the fall of 1962 she provided logistical support to the ships enforcing the Naval Quarantine of Cuba, and, less than three years later, in 1965, serviced Atlantic Fleet ships as they stood by off Hispanola during the political turmoil festering in the Dominican Republic.

In January 1968, Neosho emerged from overhaul at the Naval Shipyard at Portsmouth, Va., to commence another three year employment cycle beginning with refresher training and local operations, followed by two seven month Mediterranean tours sandwiching duty with the 2nd Fleet, and ending, in late 1970, with another overhaul.


Add Your Name to the
AO-143 Crew Roster